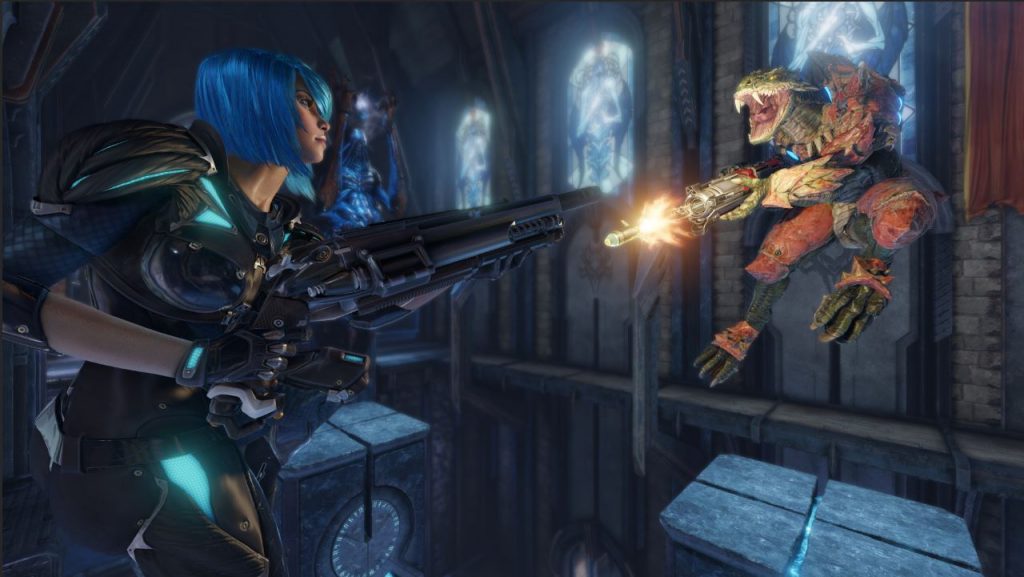 I have always appreciated the multiplayer Quake Games such as Quake 3. I just appreciated them from afar. At the time I was too busy playing Starsiege: Tribes to really get into it. It wasn’t until years later when Quake Live came out did a put maybe 20-30 hours into it.

To me, the Quake series was one of those multiplayer shooters that people played to prove themselves. It was an arena where aim and general skill mattered above all else. Guns were accurate, maps were balanced, and even movement had a lot of depth. The strategy seemed to boil down to controlling power weapons on the map and knowing when to push an opponent or when to retreat. I grew up watching eSports become a thing with tournaments such as Quakecon and players like Fatal1ty. I remember watching frag videos like Get Quaked 3. So I can certainly appreciate what Quake as a series represents and the history behind it.

So I think I understand why so many people got concerned when they announced that the next Quake game was going to have “Champions”. The idea of each character having a unique ability, movement mechanics, and health/armor stack certainly seems to dilute that simplicity and purity Quake has always had in the past. Sure its true that some of that is gone now, but I think the trade off for added depth is worth it. I also suspect that adding champions to the game should help it appeal to a larger audience and bring in some new players, which is something the series has needed for a long time. The good news is that each champion only has one unique ability, and they are not win buttons like the ultimate abilities in Overwatch. They also seem to be pretty balanced based on what I have experienced playing and what I watched in this year’s Quakecon Duel Championship matches. The game still very much plays like an arena shooter where map control and item spawn timing are important. The core of the game still feels very much like Quake to me, and I think long time Quake players that have not tried it out yet should give it a chance.

I think the biggest concern for the success of this game is not that it has Champions, but that the game is going to be free to play. Being able to switch Champions out on the fly in TDM, or have access to the full roster when picking your three in duels seems pretty important. If they are not easily earned in game it is going to be a problem. Of course there is always the option to buy Champion Pack outright for $30, which seems like a fair price to me. Honestly, I think they really should just release the game at $30 and skip the whole free to play thing. I would hate to see the game get overlooked by newer players due to there being a perception of it being “pay to win”.

Anyway, here is a few minutes of gameplay footage I took of the game once it was released to Early Access. I have less then 5 hours of time in the game so far, but don’t worry because I removed the parts where I died over and over and over again. Nobody should have to see that.