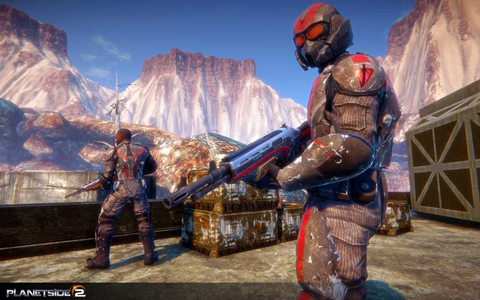 So the Planetside 2 website has gone live with a new trailer and it looks… sorta bad. I am not a fan of the art style at all, and the shooting looks terrible. Hopefully the future videos they release look a lot better then this unimpressive first trailer.

They have also posted a FAQ:

PlanetSide 2 is a Massively Multiplayer first person shooter that delivers truly epic, massive combat on a scale never before seen in stunning, breathtaking detail. Battles take place not between dozens of troops, but thousands; with air and ground vehicles slugging it out alongside squads of troops. Whether in open fields, tightly-packed urban centers or enormous structures, winning requires strategic teamwork and a quick trigger finger.

Is PlanetSide 2 an MMO?

Yes. PlanetSide 2 is an MMO FPS set in an online persistent world where the war wages non-stop and the balance of power shifts with every base and territory captured and lost. Players will be able to unlock diverse combat roles by advancing through the deep skill trees, including several classic roles from PlanetSide. As players unlock new roles, they can switch between them at will.

What are the three factions you can choose from in PlanetSide 2?

Terran Republic – An authoritarian government that leverages military might to maintain strict control over the colonial citizens. The Terran Republic is obsessed with the preservation of law and order and are thus seen by some to be an oppressive and dictatorial force, but many view the TR as the only hope for lasting security on Auraxis.

New Conglomerate – Rebels, freedom fighters or terrorists? The New Conglomerate operates as a loosely organized band of dissidents, vehemently opposed to the stranglehold that the Terran Republic has on Auraxis. Led by an unusual quorum of outcasts, industry titans, pirates and former military leaders, the New Conglomerate is unwavering and prepared to achieve their goals by any means necessary.

Vanu Sovereignty – Vanu has taught that only through technology can humanity evolve it’s next state of existence. The Vanu Sovereignty is extremely advanced, employing powerful alien technology on the battlefield. Their singular purpose is to uncover the secrets hidden away in ancient artifacts scattered over the surface of Auraxis and they will annihilate anyone who interferes.

Will there be vehicle-based combat in PlanetSide 2?

Absolutely – There are many different types of air and land based vehicles that all work together carefully.

What is the business model for Planetside 2?

We will have more information on this in the months ahead. Sign up to receive our email updates and like us on Facebook to be in the know.

When will PlanetSide 2 go live?

We will have more information on this in the months ahead. Sign up to receive our email updates and like us on Facebook to be in the know.

Will there be a Beta?

Yes. We will ensure that PlanetSide players will be among the first in. Sign up to receive our email updates and like us on Facebook to be in the know. Also, if you played awhile ago it would be a good idea to make sure that your Station Account has your most recent email address. Go to www.soe.com and click My Account.

The fact that they are not discussing the business model yet also makes me worry we are going to get a free-to-play MMO, which I have no interest in for Planetside. I am not looking to buy individual weapons and gear in a first person shooter.