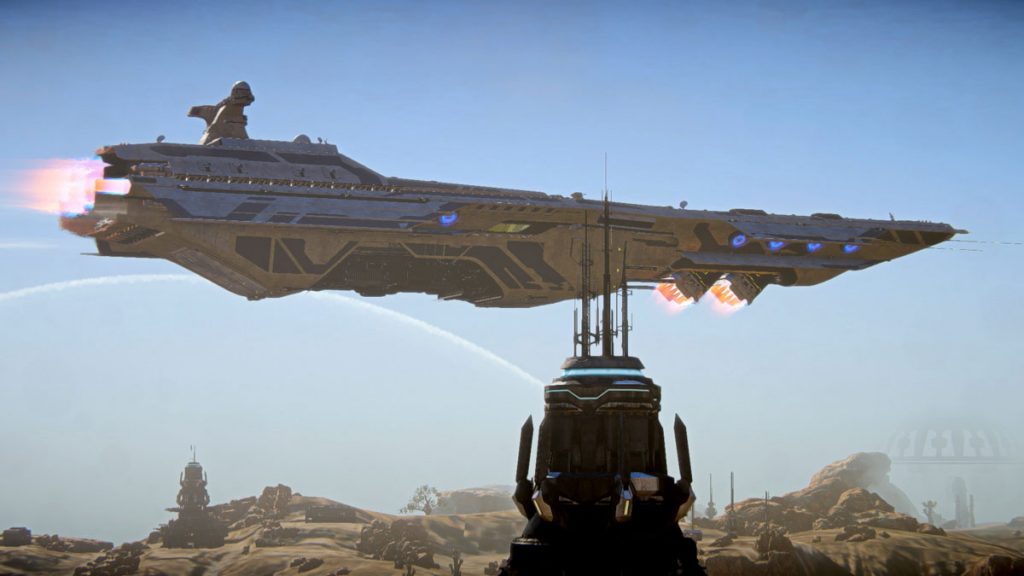 This is the 1st livestream from the “new” studio showing off some of what is going to be in their first big content patch.

Mobilize your Outfit and gear up for deployment, soldiers, Escalation is inbound and the war for Auraxis will be forever changed!

Camaraderie, teamplay, and scale are the bedrock principles PlanetSide 2 is built upon, and the new Escalation game update aims to reinforce all three of them. This massive game update introduces new content for players of all levels, creates a deeper experience for our most dedicated player communities, and adds strategic depth and communal goals to PlanetSide 2 gameplay.

Escalation is scheduled to launch on PC live servers on Wednesday, February 19, 2020. It will be available TOMORROW, Friday February 7, at 2:00 PM PST to play on the Public Test Server. Start patching up Test now, Auraxians!

Check out more about the update here, or watch the full developer livestream below.

Things were not looking good in the world of Planetside 2 last year after the failure of Planetside Arena and the layoffs in October that cost almost all of the remaining Planetside 2 developers their jobs. It looked like the Planetside 2 team was down to maybe two or three people. I was ready to write off the game as dying with no future.

But then last month Daybreak announced that they were restructuring the studio around their key franchises:

SAN DIEGO, CA – Jan. 21, 2020 – Daybreak Games today announced its “Franchise First” initiative in the form of a business structure that establishes three new individual creative franchise studios — Dimensional Ink Games, Darkpaw Games and Rogue Planet Games.  Building on the success of the teams that introduced genre-defining games and franchises including DC Universe™ Online, EverQuest® and PlanetSide®, this business model is the result of a long-term strategy designed to amplify the existing franchises while enabling each studio to further foster its unique identity, community and culture.

By allowing the identities of each of these studios to thrive under their individual studios, each team will have the flexibility to continue their work developing current and upcoming games, recruiting new talent and building upon the legacy of their respective franchises.

Dimensional Ink Games in Austin develops and operates DC Universe Online, the one-of-a kind DC Super Hero-based MMORPG enjoyed by millions across PC and consoles. Dimensional Ink will be led by Jack Emmert, the mastermind behind City of Heroes, Star Trek Online, and Neverwinter.  The studio will continue to support DCUO while developing its next high-profile action MMO project starting in 2020.

Darkpaw Games will be focusing on EverQuest, one of the most legendary MMORPG IPs recognized worldwide. Holly Longdale will continue to lead the studio as its Executive Producer. Darkpaw’s mission is to continue to expand upon the unique and amazing fantasy adventure that is EverQuest and EverQuest II and develop the next innovation for the franchise.

Rogue Planet Games, the studio branch in San Diego that broke new ground in the massively multiplayer first-person shooter genre with PlanetSide and Planetside 2, will be working to craft even more new and unique experiences in the space under Executive Producer Andy Sites at the helm. The team is looking to develop its next genre-defining experience for fans of shooters under its new banner.

In a “Producer’s Letter” on the Planetside 2 website, Andy Sites wrote:

Welcome to the genesis of Rogue Planet Games!

By definition, a “rogue planet” is a celestial object that’s not gravitationally bound to any star or its origin. This perfectly illustrates our philosophy as a team and defines the games we create – we are unbound by convention, exploring new frontiers of creativity and always pushing the limits of our imagination to deliver unparalleled experiences for our players!

While the studio may be new, the PlanetSide franchise has been going strong for 17 years. As we begin this new chapter, we’ve taken several steps to prepare for an exciting future!

Rogue Planet Games will focus solely on the PlanetSide franchise and our dedicated community. While Daybreak will continue to act as publisher and provide live operations and infrastructure support, Rogue Planet Games owns the vision of PlanetSide – present and future.

As many of you may have noticed over the past few months with PlanetSide 2, we’ve increased the frequency of our game updates, made an effort to reduce publish times by streamlining deployment processes, addressed lingering live service issues, and stepped up communication with our community.

One aspect of the new studio we’re most excited about is bringing our players into the fold like never before. As Rogue Planet Games, we view ourselves as an indie studio that values our community in the highest regard. We want to bring you into our day-to-day development processes more across all disciplines – programming, character and environment art creation, systems and content design, and any general nonsense that happens on a given day. We can’t wait to start sharing more with you across our various social channels!

Rest assured, the future of PlanetSide is very much at the top of mind here, and the expectations for a true sequel are, as expected, astronomical. The establishment of Rogue Planet Games provides a runway and opportunity for us to deliver our vision for PlanetSide 3, but that discussion will happen in due time. Until then, we have a lot of great stuff in store for PlanetSide 2!

On behalf of the entire Rogue Planet team, THANK YOU! We look forward to having you join us on our journey!

We define our future. We are Rogue Planet Games!

So it sounds like Planetside 2 has a fairly significant development team again, with all of those people that were working on PS: Arena now working on Planetside 2. Thats great news, but it is a real shame that this couldn’t have happened before the layoffs to the Planetside 2 team back in October. They lost a lot of really great people who were very familiar with the game, and I was fairly impressed with what they were able to get done with the extremely limited resources they had available to them at the time.

Still, I am actually excited about the future for this franchise again which is something I have not been able to say for quite a while. If you have never played Planetside 2, check it out. Its completely free to play: