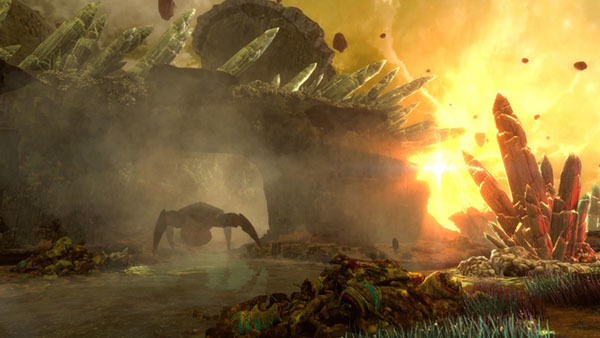 Black Mesa, the forever in development fan-made recreation of Valve Software’s Half-Life, is getting close to being complete. Black Mesa originally released as a free mod back in 2012 before later being released in a more polished form as an “early access” title on Steam in 2015. I completed the early access version of Black Mesa a few years ago and found it to be an excellent remake except for one glaring omission: the last few levels.

In the original Half-Life, Xen consisted of a number of short level segments filled with a lot of annoying jumping puzzles and a fairly unspectacular boss battle. It was easily the weakest part of Half-Life. While most of Black Mesa is a faithful recreation of the original game, they decided Xen needed a lot of additional design work in order to get it up to standards. They also had to build some custom lighting tech in order to support the visuals they were going for. It has taken the Black Mesa team a few years to re-imagine these final levels, but it looks like it was worth it.

As to when we will finally get our hands on the complete Black Mesa Package:

Our goal is to release Xen on Steam in Q2 2019. This will allow us to finish Xen to a place where the entire product is stable, smooth, and most importantly…fun! We are already happy with the design state of Xen as it stands currently: almost everything is design locked and functioning as intended. We are going to be using the remaining time between now and launch to bring it up to our art and polish standards.

Playtests show that all of Xen will take roughly 6 hours to complete; longer for those who like to explore. The levels and design for Xen are largely original work (with cues taken from Half-Life), rather than just simply a remake of Xen.