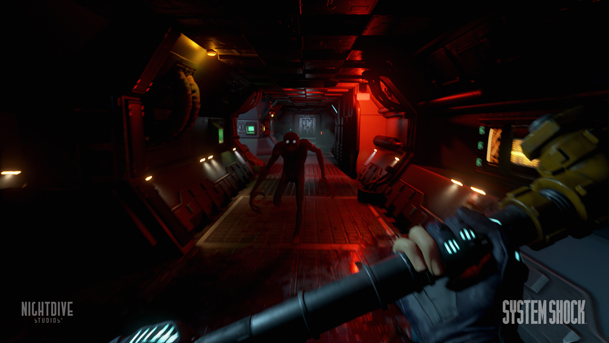 The team behind the System Shock Remake decided to switch game engines from Unity to Unreal. The main reasons cited was for better console support:

August: After listening to everyone during the Kickstarter campaign, it became clear that console support was very important to a lot of you. We took a hard look at what Unity could do on consoles, and what we wanted to achieve for both visual quality and performance. While Unity is a great engine, it was clear that we needed to use an engine that fit our project goals more closely. We took a few weeks to research various engines (mainly Lumberyard and Unreal).

September: After the engine research and evaluating feedback on our visual style, we decided to try out Unreal and see what it had to offer. Around the same time, we needed to fill critical spots for the leads team. Recruiting takes time (actually, a lot of time, especially for the senior positions). I think we went through about 30+ interviews for various candidates from Sept-Dec. Most of the folks we selected were developers I had worked with on Fallout: New Vegas, so it made getting them up to speed on things pretty quick.

October-December: During this time we focused on getting the nuts and bolts of the content inside of Unreal. Around the end of October, we were confident Unreal was the right way to go, but we didn’t want to announce the change just yet, since we wanted to prove to our backers (and ourselves) that we could deliver a slice of the game in Unreal with the updated visual direction. Couple that with the lengthy time recruiting/onboarding takes and we were steadily making progress towards our goal by the end of December.

January: The next step before being ready to reveal our efforts was to establish a proper level using everything everyone had built up for Unreal. This is essentially for the “Vertical Slice” phase, but the early stages. I like using an iterative corner approach to vertical slice, meaning we would work on a small section of the vertical slice content, iterate and refine it until we were happy with the end result (typically finding problems and correcting them, tweaking things here and there, etc). Once the corner (in this case it was actually a series of rooms, a vent shaft, several hallways, and a lovable mutant named Marty) was finished, we would be ready to expand on the rest of the vertical slice content.

February: After a lot of hard work, the corner was finally to a point we were happy with, which brings us to now! That pretty much paints a picture of where our heads were at with all of this. We didn’t make this decision lightly, and wanted to be sure we could do the game justice with this engine shift. Feel free to ask questions either in the comments or the Discord server. Let us know what you think! We want to ensure you feel we’re going in the right direction with all of this.

Personally, I am fine with the change of engines, as a lot of people were having issues running the Unity demo they released for their Kickstarter campaign. It seems like a smart move for them. What I am less OK with is the change in art direction. The original art direction was basically a modern take on the original low resolution art, and I thought it looked pretty dope. In fact, they made a pretty big deal about it on their Kickstarter page, going so far as to point out that they had the original concept artist Robb Waters on the team. From the Kickstarter:

We wanted the art of System Shock to be fresh and new while still remaining true to the aesthetics of the 1994 classic. We’ve maintained much of the original look, while accentuating it beautifully by an array of modern rendering features such as Physically Based Rendering (PBR), screen-space reflections, real-time global illumination, ambient occlusion (HBAO), volumetric particles, and dynamic lighting.

Leading our conceptual efforts is Robb Waters, the original concept artist from System Shock, the BioShock series, Thief, and Freedom Force. He’s been tasked with revisiting his work from 1994 and re-imagining it. It’s been very exciting seeing his designs evolve through the process.
–Kickstarter Campaign

Polygon had an exclusive first look at the remake where they had a bunch of awesome comparison shots of the original and the remake. You can also check out the old art style in the Kickstarter video.

It looks like every other bland sci-fi horror game, of which there are many. Disappointing to say the least. This is one of the significant downsides to Kickstarter. People can pitch games on there, have the community give them money based on what was pitched, then change aspects of it rather drastically without any input from the community that gave them money or accountability to that community. I realize that in the end its the gameplay that really matters, and I will probably still enjoy playing this game, but at the moment I am pretty disappointed.