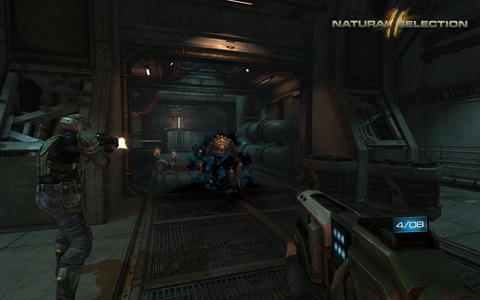 This video shows the latest version of the NS2 beta, which was released on Friday. Build 186 had a huge change log, fixing a ton of bugs and adding a few new features. The beta gets more fun with every release, and it is already in a pretty fun and playable state. Spots are still available in the beta for those that pre-order.

The game is currently in beta, and is available to purchase for US$35. Purchasing the game gives access to the beta and the full release when the game is finished. The beta is patched regularly, at a minimum every two weeks.

NS2 pits the human marine Frontiersmen against the varied alien Kharaa. The two teams, of up to 16 players each, vie for control of strategic points of large and small maps, with the goal of wiping each other out.

Each team has a commander, who views the game from a real time strategy perspective. The rest of the team plays from a first person shooter perspective. Players may seamlessly enter and exit commander mode throughout the game. Teams may build a large variety of structures to aid them in controlling territory, upgrading equipment, and unlocking new lifeforms, weapons, abilities, and support units.