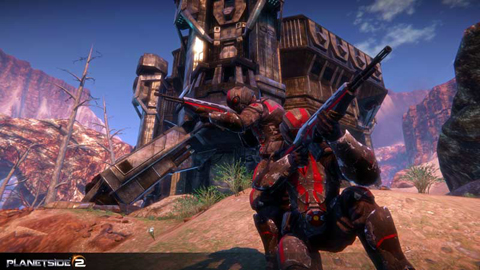 There is some interesting and disappointing information in this video. The resource system sounds interesting, and adds much needed incentives to hold territory. This sounds a lot more important then continent locking bonuses that Planetside 1 had. The offline skill tree leveling sounds incredibly stupid, but the amount of skills is pretty impressive. I would much rather have a pure XP based leveling system for skills.

The ability to customize vehicles is pretty neat, and is a nice expansion on the idea of preset vehicle variants that Planetside 1 had. Outfits are getting much needed attention. Before they were basically just persistent squads with a leaderboard score, but it sounds like you can really customize your outfits now and unlock some nice benefits.

I am also not sure how I feel about squad spawning, I could see it becoming a huge pain when defending and attacking bases. Hopefully they actually mean what they say with their three year plan and will actually listen to feedback. If they do, this game could get pretty good over time. They just better ship the game in a good enough state to get people to stick around. Hopefully the beta later this year will be fun.