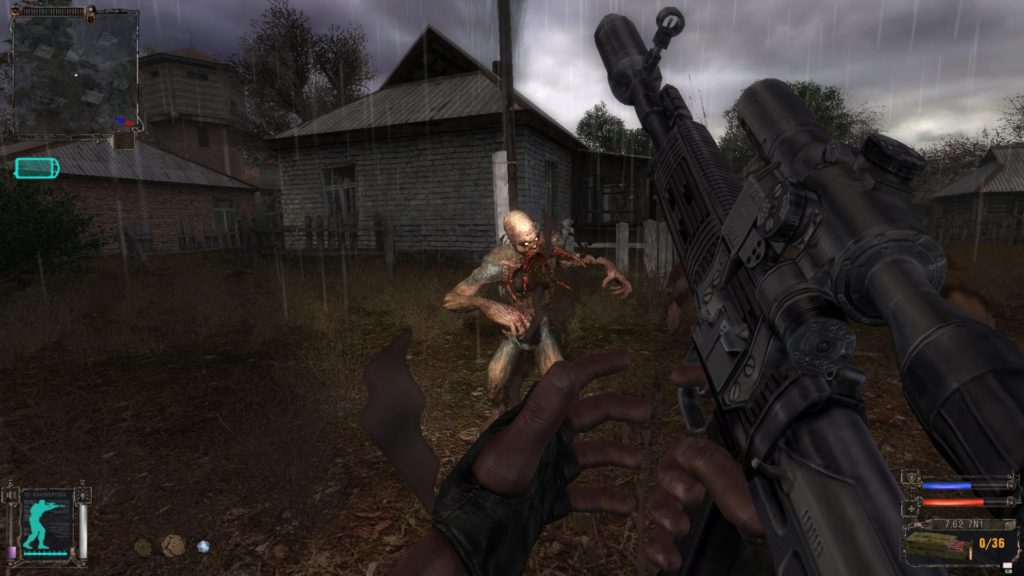 Stalker: Shadow of Chernobyl is a game that is pretty difficult to review. It seems to be the type of game that some players will love and others will hate, and both will have equally valid reasons for feeling that way. Stalker offers a very unique experience, which can be hard to come by these days, and it is also an extremely atmospheric game. The huge world, rpg/sim gameplay, and open ended nature of the game are great. But there are also a bunch questionable gamplay mechanics as well as bugs that a lot of people would have a hard time overlooking. Whether or not you would enjoy this game will depend on how much you are willing to put up with in order to experience a truly unique shooter in a compelling setting.

As the title gives away, Stalker takes place in the ruins around Chernobyl. Chernobyl was a nuclear power plant in Ukraine where one of the reactors exploded in 1986, resulting in a severe release of radioactivity into the environment. The surrounding areas were abandoned and still are to this day. However, in Stalker’s alternate history the Zone is populated by various factions of scavengers, and the radiation has caused strange otherworldly changes in local fauna, flora and the laws of physics. This makes for an interesting setting that cannot really be compared to anything else, and simply exploring the Zone can be a lot of fun.

You play as “The Marked One”, a stalker that has lost his memory after nearly being killed in a vehicle explosion. All you know is that you were on a mission to hunt someone named Strelok, and are let lose in the Zone with one simple objective: find out who and where Strelok is and eliminate him. Most of the story is told through conversations with NPCs (only some of which are voiced) as well as a few cutscenes for key moments. The story is pretty interesting overall, but it can be somewhat difficult to follow at times. Plus, a lot is revealed at the very end of the game instead of you steadily piecing parts of it together as you play. 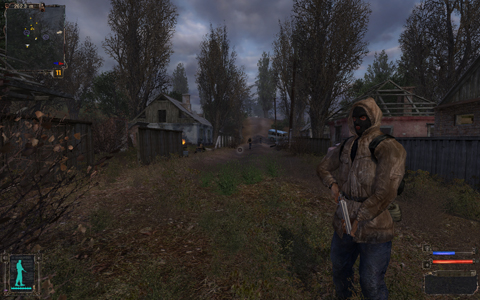 Along the way you will meet literally hundreds of other NPCs which you can interact with, a number of which will give you side quests for rewards. However a lot of these side quests are not very interesting. Making things even worse is the fact that they are often not worth doing. The rewards are rarely worth it, and Stalker is not a true RPG in the sense that your character does not gain experience points from killing enemies. So completing these side quests often just feel like a waste of ammo and other resources. Also, many of the quests have annoying time limits that require you to complete them in a certain number of days before they automatically fail. There were times when I had completed a quest and simply had to return for my reward, but the person I had to see to pick it up was so far away that I couldn’t be bothered to return. By the time I had gotten back around to that part of the world, the quest had long expired and I could no longer collect my prize.

The open-endedness of the game is both one of its strengths and weaknesses as it can often be unclear what you should be doing at any one point. The map system does point you towards your objectives, but it is cumbersome to use. Also, your only means of transportation is your own two legs. You can sprint, but there is a stamina bar that drains extremely quickly if you are carrying too many items. But in return for these annoyances you get an extremely interesting and atmospheric world to explore. The Zone feels like a real place that is inhabited by other people, but at the same time you still feel completely alone and vulnerable which is really cool. Sure walking long distances can be tiresome, but the fact that you don’t know what will happen to you along the way keeps things interesting. You might have a completely uneventful trip, or you might be ambushed by mutants or hostile stalkers. Or perhaps you will stumble upon a hidden cache of goodies or find artifacts to boost your stats.

The combat in the game is extremely intense, but it is admittedly not for everyone. As the game is a sim of sorts, you can die extremely quickly in firefights, weapons will degrade and can jam on you, your character can bleed to death if you don’t have bandages, and many of the weapons are not very accurate. This is especially true towards the beginning of the game before you get good body armor and weapons. Later in the game you find more advanced and accurate weapons, but up until then it can be frustrating at times. As such, you must constantly use cover and lean around corners, learn when to retreat, what range your weapons are most useful at, what ammo types they can use, what firing modes you should use at different distances, and avoid getting into fights unless you are properly equipped. If you like really challenging and complex combat you will enjoy it, but if you don’t this game isn’t for you. 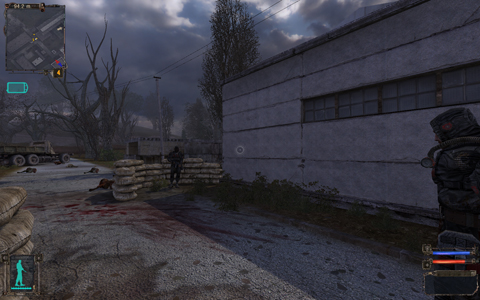 Surprisingly, the games graphics still hold up well today if played on the highest settings. Objects are extremely well textured with a good amount of detail, and the game has a good real time lighting system which really looks great in the creepy dark underground areas. The design of the Zone itself is also superb with a good mix of urban and rural areas, and it feels like a real place. Much of this is due to the fact that they recreated a lot of existing locations surrounding Chernobyl. The best thing about the graphics has to be the sky/weather system. There were many times when I would find myself simply admiring lighting in the distance during a huge storm, and how each bolt of lightning would briefly light up the world. The game also has a physics system, so bodies drop and boxes break as they should.

In the end, whether or not you will enjoy this game depends largely on if you are willing to put up with some of its problems in order to experience a unique game with an interesting story that takes place is a great location. Sure the game’s quest system is cumbersome and a bit broken and the combat can be extremely difficult at times. Yes, you will spend a good amount of time walking around the game world and backtracking to previously explored areas. But the game is also extremely unique and interesting because of its setting and rpg/sim elements. If the combat sounds too difficult and if you prefer more structure in your games this is probably one you should avoid. But if you enjoy a challenge and are willing to put up with some questionable game design decisions in order to experience something new for a change, then go ahead and pick up a copy of Stalker: Shadow of Chernobyl. You will hopefully walk away from this game impressed on your way to the store to pick up Stalker: Clear Sky.