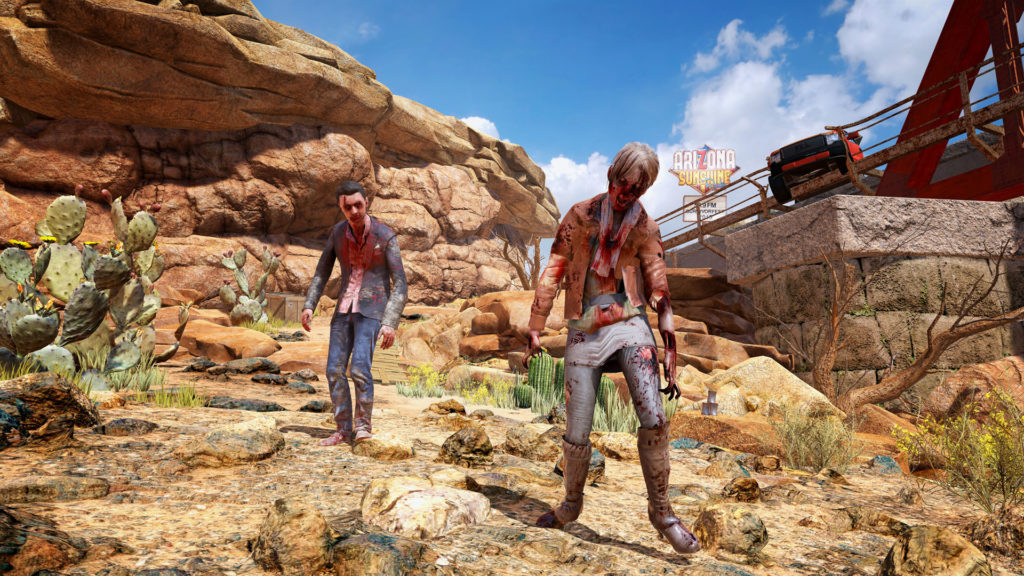 There are a lot of Virtual Reality shooting games out right now. Most of those games can be best described as tech demos. It would be a little unfair to label Arizona Sunshine the same way, but I also wouldn’t go so far as to call it a “full game” either. The game features a campaign, which can be played solo or co-op, as well as a multiplayer waved based survival mode. The campaign itself is somewhat short. Most people will probably be able to finish it in around four to five hours, but it is the shooting mechanics and the variety of scenarios presented that make this game worthwhile.

The story campaign starts without much fanfare. You wake up in a cave where you have been camping out, there are zombies outside, and its time to go kill them. The player’s character talks to himself and the zombies, sometimes telling jokes and other times making observations. The main “plot” of the game involves you hearing a radio transmission that sounds like its from other survivors, so off you go to find them. Arizona Sunshine is extremely light on narrative, and what is there is not exactly an enthralling. However, to focus on the storytelling is really missing the point of the game.

Virtual Reality games like this live or die on their gameplay and immersion, two things that Arizona Sunshine nails. Movement in this game uses the teleporting mechanic, which has become fairly standard in VR games at this point. You can use the thumbsticks on either hand to point at a spot in front of you to teleport to, and you can set the direction you will be facing when you come out of the teleport. Tapping a direction on the stick will rotate the camera in place. For example, flicking the thumbstick down will cause you to do an instant 180 degree turn. The game does some collision detection to prevent you from teleporting thru solid objects, so you still have to “walk” around and navigate as you would a typical game. There seems to be an invisible stamina meter at play here as well, which prevents you from abusing the teleport mechanic to get away from the zombies. You can only teleport so many times over so much distance before you have to let the meter recharge. Selecting stairs or ladders teleports you to the end of them, avoiding any awkward first person traversals. Overall, moving around the environments works extremely well.

When you first load up the game, it has you place your hands at your side and squeeze the triggers on the controller to calibrate where your waist is.  This is because a lot of the combat in the game revolves around weapon holsters attached your belt.  You can carry four weapons at one time: one in each of your hands as well as one on each of your hips. Ammo is also stored on your belt, and the only way to find out how much ammo you have is to look down and visually inspect it. Picking up spare ammo in the game physically requires you to reach out, pick up the magazine, and bring it to your waist to deposit it. Reloading weapons require you to hit a button on the controller to drop the magazine out, and then move the gun to your waist to have it reload. Reloading this way does not actually make much sense if you think about it (how is the new magazine inserted into the gun with one hand?), but its a fun reloading mechanic that feels cool to do. Its also something you will likely forget how to do in moments of panic. There were a number of times when I was surrounded by zombies and in my panic I completely screwed up the reload and died. Some people wont like this, but I feel like it adds an interesting psychological element to the game where you need to keep your cool in stressful situations. 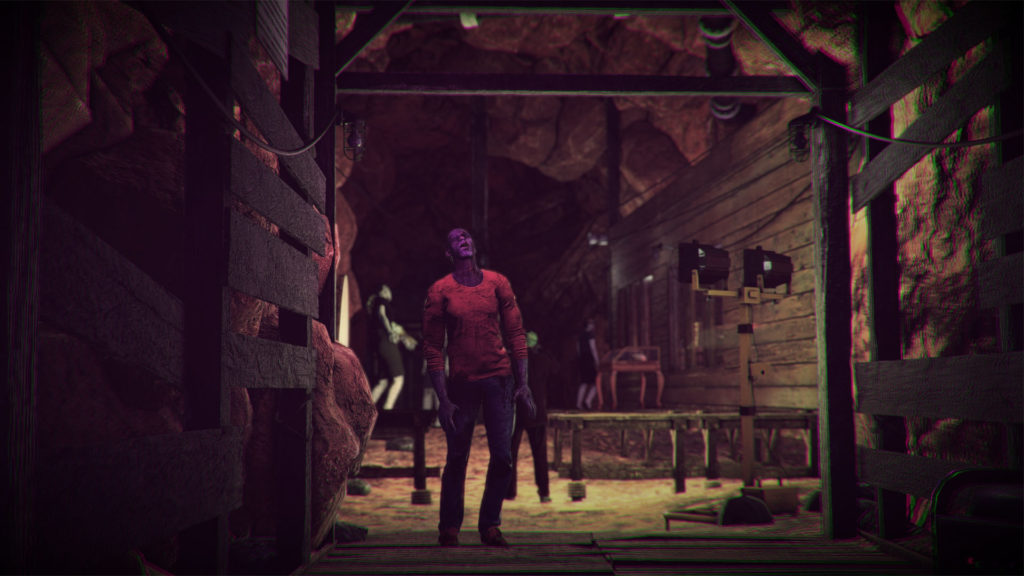 A big part of the game is searching for additional guns, ammo, and health. I always found myself with just enough ammo to get by, and never enough to really feel comfortable that I could stop looking for more. When on the highway, you can search most vehicles by opening doors and looking around inside. This sounds like a mundane task, but in VR it is quite immersive to physically reach out with your hands, grab a door handle, swing it open, and then put your head inside the car and look around for resources. Likewise, searching buildings often involves opening cabinets and desk drawers. It adds a much needed physical connection to the world to help sell the immersion. Its unfortunate that a lot of stuff in the game world is not interactive though. Many environment props are static and won’t react if touched, shot, or blown up. 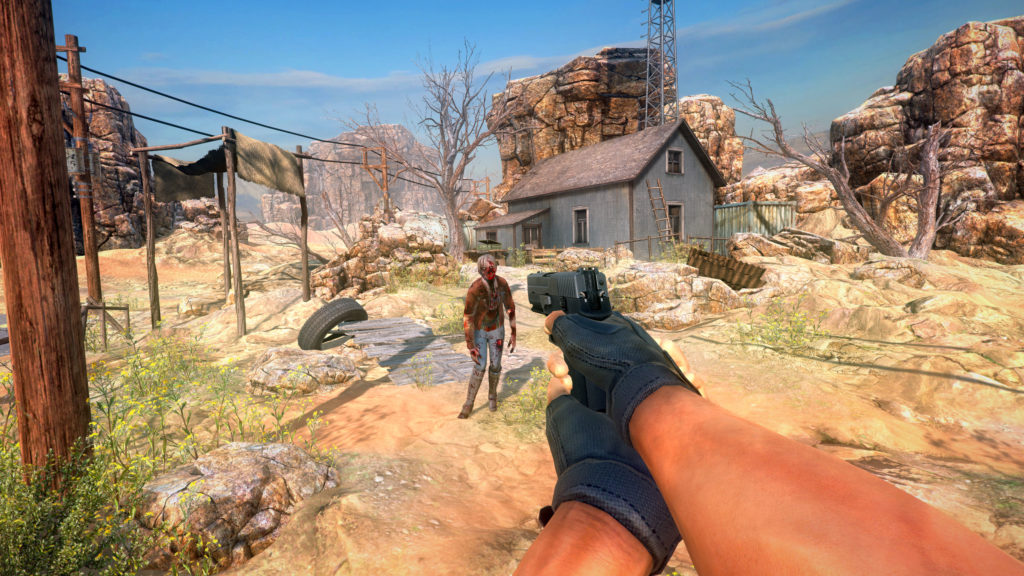 I played this game on a three sensor setup on the Oculus Rift, and found the tracking to be next to perfect. The shooting mechanics in the game are somewhat realistic in that you need to properly use the iron sights on all of the guns. If you do not know how to shoot in real life, you might want to go watch some YouTube videos before picking up this game. Unlike traditional video games where you right click a mouse and the iron sights come up perfectly, you actually have to adjust the position of your hand and rotation of your wrist to align the dots on the sights, make sure there is equal distance between the posts, etc. There are quite a few different weapons in the game including pistols, SMGs, shotguns, grenades and the occasional rifle. The major differences between the pistols seems to be ammo capacity or attachments. There are no weapon stats listed, so I was never really sure if some pistols did more damage then others. There also doesn’t seem to be realistic ballistic modeling, so there was no bullet drop or anything like that. As a result, I tended to just stick with the handguns that had the better iron sights and ammo capacity. This is one of the major areas of the game that I feel could use a lot of improvement. The weapons need to be more distinct from each other. A .45 ACP should hit harder then a 9mm, and the velocities and trajectories of each should be different. The game also does not really have recoil on the weapons, but that’s not really something you can do in VR because the position of the gun in the game needs to track with the position of your hand.

Shooting at the zombies is really fun. There is a good range of walking animations on display. They seem to randomly shuffle from side to side or stumble at times, so their movement is not entirely predictable. Some walk slowly, while others run quickly at you. With the exception of the armored zombies, they all will go down with a single well placed round to the head. The resulting sound and ragdoll animations are pretty satisfying, especially when you manage to land a perfect shot from a pistol at range. Shooting zombies at range can be difficult because you usually do not have access to any sort of optics. Also, because of the resolution limitations of VR headsets today, it can be hard to make out zombies at a distance. Imagine trying to line up the front sight post of a handgun with two pixels because the zombie is far away in the distance. Its not easy to do. Of course that is a limitation in the hardware, and not the fault of the game. Most of the combat in the game takes place short range, so its not really much of an issue, and if you are playing this game in a few years when resolutions on headsets get better, it probably wont be an issue at all. 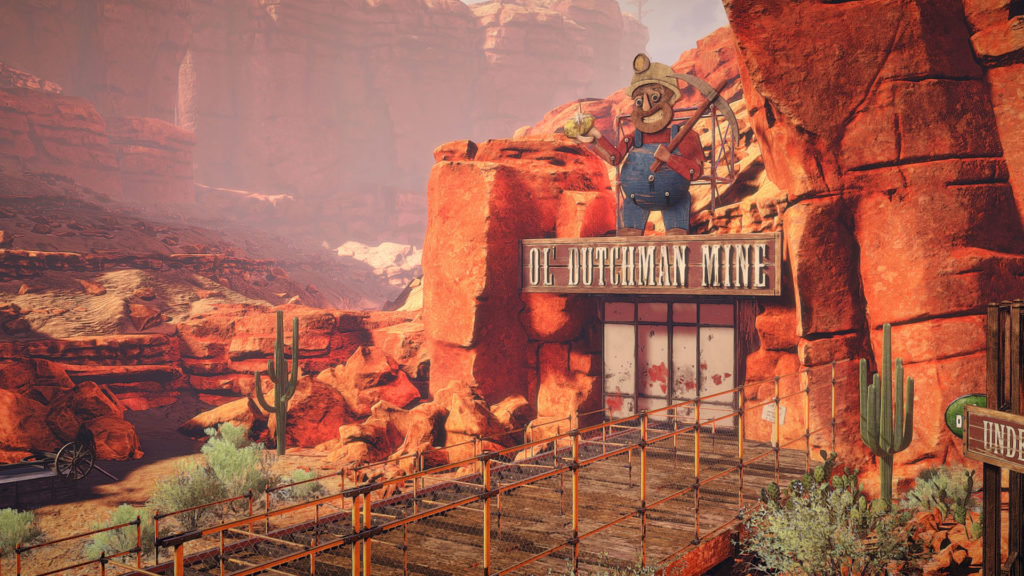 The variety of the scenarios you get to fight in is good as well. From highways with abandoned cars everywhere to trailer parks and temporary military camps. There is even a sequence where you have to fight in an abandoned mine. The mine is very dark, so you have to hold a flashlight in one hand and a gun in the other. Its a very interesting VR experience to be stuck in the dark with zombies, scanning the flashlight with one hand and trying to take shots with the other. The pacing of the game is even overall, none of these sequences outstay their welcome. Just about the time I was starting to get tired of the mine I found an elevator to get out. There are also a number of points in the game where you get locked into an area and swarmed with a ton of zombies at once. These sequences seem to come after you are given a lot of weapons and ammo. They are intense and difficult, but also a lot of fun. I found that smart positioning a few well placed grenades were key in these situations.

Once you are done with the story campaign, you are left with the online “horde mode” wave based shooter portion. The mode is fun enough, and sharing the same VR space with other players while you are all working together to take out waves of zombies is enjoyable for an afternoon or so before it gets repetitive. The biggest problem with online modes like this in VR games is that not a lot of people have VR headsets yet. The Horde Mode is not the main focus of Arizona Sunshine so it can actually be hard to find another person playing this online, much less a group of people to play with. It is certainly a nice bonus for the game to have, but unless you have other friends with VR headsets and this game you might have a hard time properly experiencing it. You could play it by yourself, but that is not very fun.

The biggest issue I have with Arizona Sunshine is the price to game length ratio. At $39.99 it is not easy to recommend due to the 4 to 5 hour length and difficulty finding online matches. There is a fun game here, but that asking price is a little too steep. Wait for a sale, and pick it up when it is $20 or less.

Most people will probably be able to finish it in around four to five hours, but it is the shooting mechanics and the variety of scenarios presented that make this game worthwhile. Just make sure you buy it on sale.