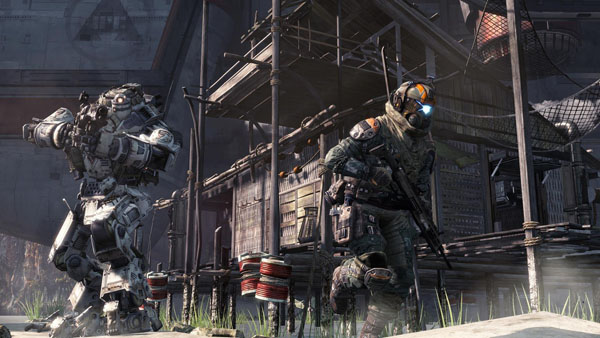 I have been playing the Titanfall “Beta” (demo) for a few hours now and I like what I see so far. The game has that fast and fluid pace that Call of Duty has, but the gameplay is a lot more dynamic. The maps have a great vertical element to them, and with the jets and wall running you have a lot of freedom to move around and get behind your enemies. It reminds me a bit of how Brink controlled, only better. The Titans are not the overpowered beasts that I was worried they might be, and are actually pretty fun to use. They Titans are fairly maneuverable, allowing you to be smart about when to engage enemies and when to fall back.

The only thing that I find sort of weird is all of the AI controlled enemies in the maps. The only thing I can think to compare them to are lane creeps in DOTA/LoL/HoN. They don’t pose any challenge at all, and seem to exist only to pass the time until people start calling in Titans. Killing them lowers the time until you can call in your Titan (or gives you points in Attrition mode), which seems like the only reason to even engage them. I feel the game would have been better served by allowing more people to play at once, then trying to fill out 6v6 games with these AI opponents.

I am also not a huge fan of the burn cards, which are single use card you can equip that give you various advantages until you die. Examples include infinite magnetic grenades or “Amped” weapons that do more damage. You unlock these by completing challenges and only “burn” them once you die. It adds a somewhat random element to the game and I honestly don’t see the advantage to these existing at all.

Still, initial impressions are good. Titanfall seems to be a pretty fun casual shooter with a reasonably high skill ceiling. It’s not something I would expect to see played competitively, but that’s totally fine. I will probably be picking the game up in March.

Enjoy these gameplay videos below of some of my first matches where I have no idea what I am doing: