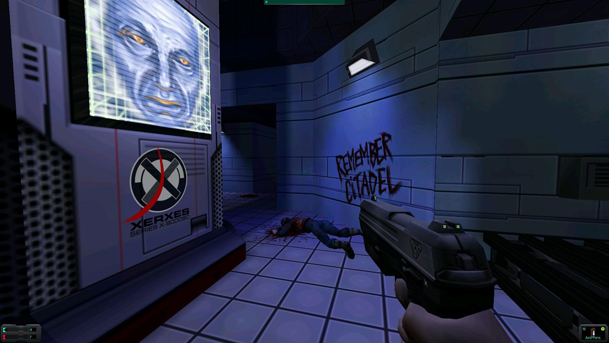 The unthinkable has happened. Somehow the licensing issues for my favorite game of all time have been sorted out by the amazingly dedicated folks over at Good Old Games, and they have convinced the parties involved to allow them to re-release the game on their website DRM free. I would like to say that this came out of absolutely nowhere, but I cant help but wonder if the random patch we had a few months back was somehow related. It might not be, but either way I have been an extremely happy fan these past couple of months.

I can’t even begin to express how excited I am that this game is available again for people to experience. I know there are a lot of people out there besides myself that have been wanting this to happen, as the game has been on the top of the GOG Community’s most wanted list for years. If you have never played the game, you owe it to yourself to pick up a copy tomorrow. You can think of the game as a more in-depth sci-fi horror RPG version of Bioshock. In fact, I even compared the two a bit before Bioshock came out. Of course its not surprising that the two games are so similar. The same company, with many of the same employees, developed both games. Bioshock was Irrational Games’ spiritual successor to System Shock since the license for that game was unavailable to them (and EA didn’t seem to care about it).

So how was this able to happen? GOG managing director Guillaume Rambourg explained to RPS:

We have contacted lots of publishers, developers and lawyers over the past 4-5 years – mostly industry veterans actually – to better understand the big legal puzzle behind this game and identify who owns the trademark, the IP, the code, distribution rights and so forth. We got lots of answers, sometimes aiming at the same direction, sometimes pointing in conflicting ones. You know the drill: one step forward, two steps back. It was a real investigation a la Tex Murphy. A very tough case, definitely, but we never lost hope.

Whether you are experiencing System Shock 2 for the first time or playing it again for the 20th time, don’t forget that there are a lot of great mods out there that can get your game looking great. If this release is like others from GOG, there shouldn’t be any compatibility problems with the existing mod content. It also should work great “out of the box”, so hopefully no worries about getting it running in the first place. We will all know more tomorrow. I am  hoping that this is a solid release.