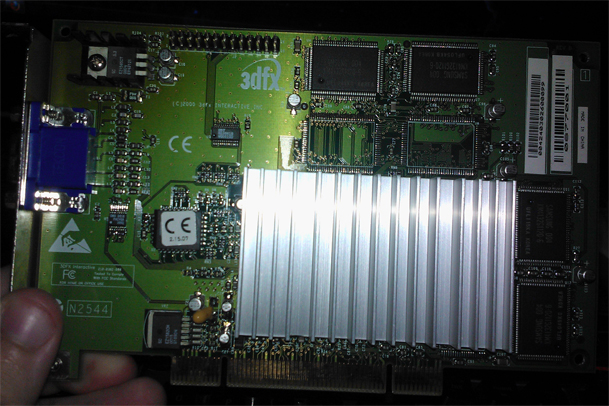 I was digging around my closet looking for old junk to throw out and I came across some old PC hardware. This Voodoo3 3,000 was my very first graphics card. It brings back a lot of great memories of late 90s PC Gaming. It was an age of great innovation, with a lot more competition in the graphics card industry.

I remember buying Aliens vs Predator and being shocked that I had to then buy something called a “graphics accelerator” to get it working. Once I got this card installed, I knew I would be a PC gamer for life. AvP looked and ran amazing, and Starsiege: Tribes stopped looking grainy and gained colored lighting. This is the card that I first experienced Half-Life, Quake 3, Unreal Tournament and System Shock 2 on. It was a great card for what it was. Looking back, its only downfall was that it didn’t support 32-bit color. I didn’t mind it at the time though, since I had no idea what I was missing out on.

3dfx managed to stick around until October 2002 when it filed for bankruptcy. Much of its intellectual assets and many employees were acquired by Nvidia. A majority of the 3dfx engineering and design team working on “Rampage” (the successor to the Voodoo4 line) that remained with the transition worked on what became the GeForce FX series.