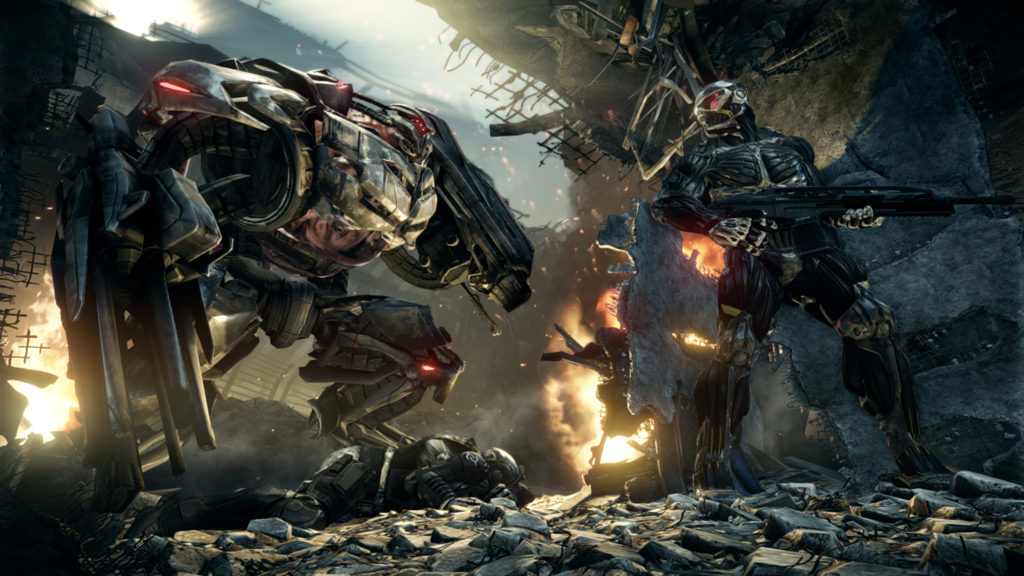 Crysis 2, the latest graphical powerhouse from developer Crytek, marks a number of firsts for the developer. For the first time they have left the lush tropical setting and moved to the urban jungle of New York city, providing a number of gameplay changes from previous games in the city. Crysis 2 also marks the first time the developer has targeted the console platforms as well as the PC. This decision was met with some disappointment from some of the PC gamer elitists. All of Crytek’s previous games focused on pushing PC graphics technology as far as it could go, resulting in games that looked absolutely stunning but required thousands of dollars of PC hardware to run adequately. PC gamers often used these games as showpieces for their gaming rigs, using them as an example of why PC gaming was superior to the consoles. The disappointment was based on the assumption that by developing the game for the consoles, the PC version would suffer due to the rather old console hardware.

It would seem that in the process of optimizing the game to run on the older console hardware has resulted in much more reasonable system requirements on the PC then the previous Crysis games. I was able to run Crysis 2 on my somewhat modest gaming PC at the maximum graphics setting with very smooth frame rates. This same computer still has the occasional slowdowns running Crysis 1 at maximum graphics settings, and that game is a few years old at this point. That is not to say that the game doesn’t push graphics hardware like the first Crysis did. This game looks absolutely phenomenal, easily winning the category of best looking game this year. In fact, every aspect of the presentation is impressive. New York city is almost photo-realistic at times, and the scope of all of the environments is truly impressive. Character faces look lifelike, and the animation is fluid and natural. The visual presentation here is second to none, and the fact that the game runs on consoles is an equally impressive feat. The PC version of the game is the best looking of them all, but the Xbox 360 and PS3 versions look great as well. Whatever platform you play Crysis 2 on, know that it is the most impressive looking game around. The only disappointment with the presentation was some issues with 5.1 surround sound mixing. Dialog coming out of the rear channels was often too quiet, even when the character speaking was only a few feet back. 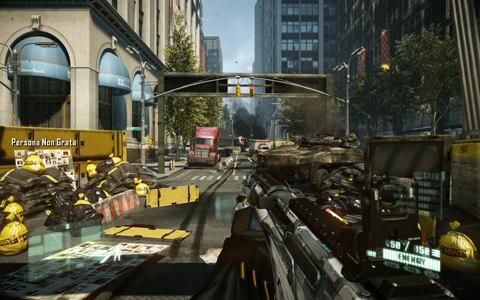 Moving the game from the jungle to the city has resulted in a few gameplay changes over the previous two entries in the series. The environments in the previous games were pretty wide open, allowing for numerous ways to approach each enemy encounter,  places to hide, and tactics to take. The open-ended level design of Crysis 2 has been scaled back a bit, as you have fewer opportunities fighting in city streets then in dense vegetation filled jungles. The tradeoff here is that the city provides a bit of verticality that the other games never had. There are lots of things to climb in the city, providing lots of opportunities to take the high ground and work your way around patrols. The setting also provides a lot more cover to take advantage of, with abandoned cars, signs, benches, and other things placed all over.

You still have the same weapon customization options available as you would expect. You can attach an assortment of scopes, silencers, laser sights, and launchers to many of the weapons, increasing their usefulness in multiple combat scenarios. The suit abilities are back, but this time you can customize those as well. Taking down the alien enemies in the game provides you with “nano catalysts”  to spend on suit upgrades. These upgrades have affects such as reducing the energy drain while cloaked, adding tracers to bullets fired at you, increasing the damage you can absorb, and providing you with more air control when falling. You can only have a few of these upgrades activated at a time, and the proper selection of upgrades in the right situation can make your life a lot easier. 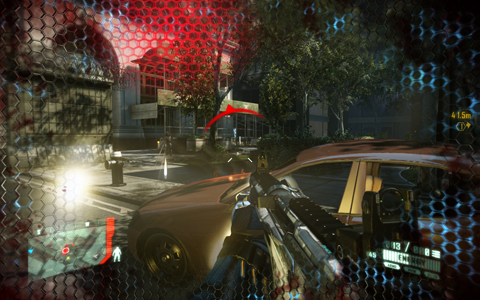 The suit has also been streamlined a bit, and the game is better for it. Instead of having to manually switch between speed and strength, they automatically kick in when you want them. Holding down the sprint button activates speed, draining energy as you run really fast. Holding down the jump button will automatically activate strength, allowing you to jump many feet into the air. The suit controls much more naturally now, allowing you to stay in the combat at all times instead of fumbling with a radial menu when you need to switch abilities.

The open environments and the customizable weapons and nano-suit abilities gives the combat in the game a sandbox feel. There are a lot of ways to approach any combat space, and thanks to pretty solid enemy AI no two encounters will ever play out the same way. The brute force and stealth approach are always viable options, however the stealth route is often pretty easy and ultimately less satisfying. It is just way too easy to sneak past enemies using the cloak if you have upgraded it, often allowing you to skip somewhat large portions of the game. For example, at one point in the game you are tasked with fighting your way into an armored compound to kill the enemy leader. Dozens of heavily armored guards stand between you and him. The resulting firefight is intense and extremely fun. However you could also choose to cloak and bypass everyone, walking straight up to the commander and taking him out without a shot fired.  Since a lot of the combat can be skipped if you choose, your playing time will vary.  I only used the stealth suit to sneak past a few encounters and finished the game in roughly eight hours. 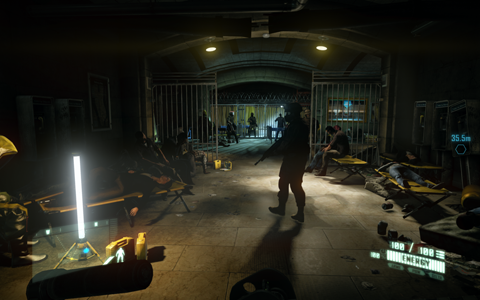 Some of the people I have talked to consider being able to skip large portions of the game broken, making the game less fun. I tend to disagree. If you treat every game as a challenge to overcome with the least resistance possible, I could see how you might be disappointed. However I strongly believe that in games like Crysis 2, you are fully responsible for your own experience and enjoyment of the game. I play games to have fun, not to find the most optimum way to beat it. I wouldn’t find sneaking past everything fun, so I simply didn’t do that and I had a great time. I got into some of the most intense gunfights I have ever experienced in a game, often times barely escaping death. However, if you are one of those people who play games simply to win, and do so by whatever means you can (such as exploiting the AI), I will warn you now that your fun might vary.

The story in the game is probably the weakest part of the package. It seems that a considerable amount of time has passed between the events of Crysis 1, and the game does a poor job of filling you in on what has happened.  You start out as part of a squad of marines sent in to rescue a scientist named Gould who has important research about the aliens. In the opening moments of the game your squad is wiped out, but not before Prophet,  one of the nano-suit soldiers from the first game, saves you. You are given his armor, and it is up to you alone to carry out your mission. Your interaction with other characters in the game is pretty limited. You get a few moments of face time with Gould during the campaign, but it seems most of the characters in the story simply exist to yell orders at you over the radio or provide you with someone to take out. The story is big on technical details about your suit doing something with the alien tissue samples you are collecting, but it is not always clear what exactly is going on are why you are doing some of the things you are tasked with. However in the most basic sense the story does get the job done. It provides you with enough motivation, and provides a number of pretty epic set piece battles. 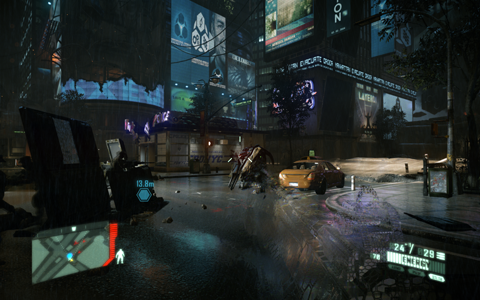 Crytrek has gone with the Call of Duty approach to the multiplayer aspect of the game, so if you have played any of those games you know what you are getting into. You have a persistent character profile that ranks up as you play, allowing you to spend XP to unlock new abilities and weapons. Just like in the single player campaign, you can customize your weapons with attachments, providing players with a lot of options when creating their own classes. Other features taken out of the Call of Duty playbook include challenges you can complete to unlock bonuses and map specific killstreak rewards. Some of these rewards, like the orbital laser strike, can be very devastating. Finding a game to get into is easy thanks to a quick match option, where you specify the game mode you want to play and you will automatically be placed into a game. I found search times to be extremely quick, and most games to be lag free thanks to dedicated servers on the PC. The suit abilities and their energy draining mechanics add a neat aspect to the multiplayer gameplay. For example, sprinting around uses your suit energy, resulting in less energy to absorb damage should you run into an enemy player. Knowing when and how your abilities and how to manage your energy is required to do well. The stealth ability provides a lot of opportunities to play sneaky and outmaneuver your enemies, and becomes a very valuable tool in objective based game modes.

Overall Crysis 2 is a compelling game. The single player campaign offers a lot of intense gunfights and breathtaking visuals, while the online multiplayer offers solid, if not uninspired, social fragging. Only time will tell how much staying power the online aspect of the game has, but as of right now the game has a sizable online community. With a standard length campaign, enjoyable multiplayer, and the best graphics of any game to date, Crysis 2 is worth picking up.

An intense single player campaign and a fun, although uninspired, multiplayer makes Crysis 2 worth picking up.