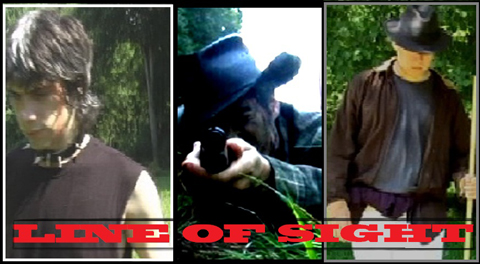 My friend over at Strike a Pose Films is releasing a new film tonight. His past work has been pretty impressive, and this new film is no different. This one, titled Line of Sight, is his first choreographed action movie.

SYNOPSIS:
A few hundred years past our time…

Stray is a ruthless cage fighter, exiled from his hometown of Canine, the militaristic training grounds of The Peregrine Saga. In a rage, Stray ruthlessly beat his opponent to a bloody, near dead pulp during a major match. Problem was, this time his rival was the Boss’s son, so Stray was given a choice: get lynched by the locals or get the hell out of dodge. Given a gun with a single shot and told never to return, Stray makes a run for it into the scenic “wastelands” of the forgotten world.

Along the road he encounters a monk, crossing his path at a slow but steady pace. Doing their best not to agitate each other, the two initially pay the other little mind. However, the Boss from Canine town has placed a bounty on Stray’s head, going against his own promises, and has sent the former Caliber town survivor, the gunman Flintlock, to collect.

It is here the two warriors from different sides of the Appalachian Range find themselves stuck in a duel to the death, both of them trapped in a mad bounty hunter’s Line of Sight.

As he explains in his introduction, the movie was originally shot three years ago. It has been sitting on his hard drive over the years in various stages of completion. I have known about it for a while, and have been bugging him to finish and release it. At last he finally has. Click here to watch Line of Sight.