For the past couple of months, I have had an issue where my Xbox 360 would constantly overheat. Sometimes it would overheat in less than 5 minutes just sitting at the Xbox 360 dashboard. Seeing as it should not be overheating that quickly, I figured there was a good chance that my system was just too dirty, preventing proper air-flow. My launch Xbox 360 has the newer heatsink cooling solution after being sent in for repairs for the RROD twice, so I figured the culprit in this case was probably dust.

Let me start by saying that I have had my Xbox 360 since launch. Since then I have sent it in to repairs three times. Twice for the RROD and once for broken DVD drive in a refurbished console they sent back to me after the 2nd RROD. Overall, the repair experience was good and fast, and if your console is still under warranty I would always suggest sending it in for repairs. Once you open it, your warranty becomes void and there is no going back. However, my warranty expired some time ago, and I was not willing to pay the fee to have Microsoft fix what could be a simple issue. Plus, I had gotten to the point that something had to happen, either I fix this issue or I need a new console. So with nothing to lose I opened it up.

The easiest way to open it up is to order the Xbox 360 Case Opening Tool. It’s only a few dollars, comes with everything you need to open the Xbox 360, and it saves you a lot of effort. In addition to that, I also needed a compressed gas duster. They sell these at every computer store, including shops like K-Mart or Wal-Mart.

Opening the Xbox 360 is a bit of a chore. It was designed in such a way to prevent home users from being able to open it, which is why the case tool is so useful. Once you have it, you simply need to follow one of the many guides online. Personally, I suggest this guide, which assumes you are using the case tool. I found it pretty easy to follow, with a nice set of pictures to go along with each step. If you are set against buying the case tool, you could always follow this video guide. 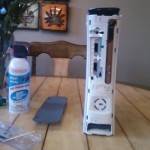 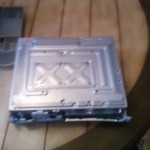 After following those instructions, you should now have the Xbox 360 open. All that is left to do is to remove the fan shroud, lift out the DVD Drive (either disconnect it or just move it out of the way) and blow out all the metal heatsinks with compressed gas. It’s also not a bad idea to blow out the fans as well. Just hold them steady as you do so as not to damage them. 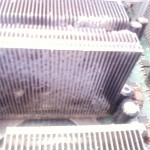 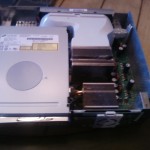 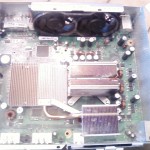 From these low quality cell phone camera photos (I need to get a new one), you can see that the heatsinks on mine were pretty dirty. After blowing everything out, it was good as new. Then I simply put the console back together by following the steps exactly in reverse order. I have used the Xbox 360 for a few days now and it has not overheated once. In fact, it’s noticeably quieter since the fans are not spinning as fast to cool it off. 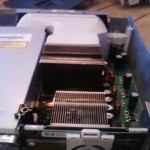 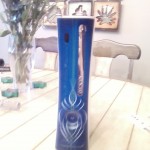