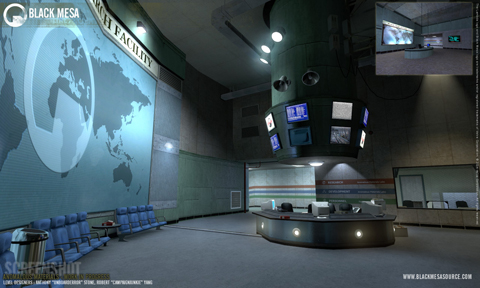 Black Mesa, the Half-Life remake on the source engine, has released an update. The mod was previously scheduled for a 2009 release, but it appears that it is going to be delayed. This isn’t the first time that it has failed to meet deadlines, but the game looks so good that I honestly don’t care when it comes out, just that it does come out. There are far too many mod projects that never see the light of day, and mods that look this professional are too few.

We come to you once again with an update. It’s now the end of 2009, and we know many of you have literally counted the days down until this fateful month. We are floored by the level of support you have given us and are very excited we’re so close to reaching our goal.

Unfortunately, to our great disappointment, Black Mesa will not make a 2009 release.

Cynics may now rejoice, bets may be collected, and I think a mod team member has to eat his shoe, but we hope our loyal fans will forgive us and realize that the delay will translate into a better final product that’s (hopefully) more easily available to everyone.

Once again we apologize for what has to be very disappointing news. We placed a 2009 deadline on ourselves to motivate us and bring this 6 year project to a close. And while we didn’t quite make it, we have come very close, and you can expect a complete, polished game to hit your hard drives in the near future. We’ll be sure and update if anything changes. Until then, hang tight, it’s coming!

If you missed the incredible trailer they released last year, it can be viewed here.