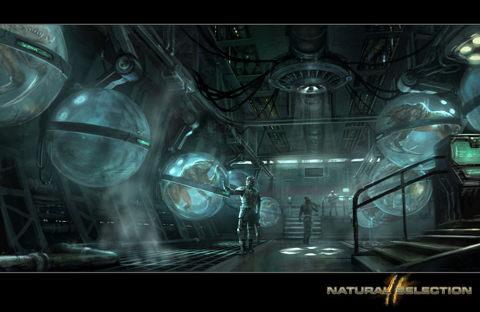 To celebrate the seventh anniversary of the release of the original Natural Selection, Unknown Worlds has released some new screenshots along with an update of the current status of the game. I have been playing a ton of the original Natural Selection since the pre-orders for NS2 opened, and I have been completely addicted for the last few months. There really is no other game out there like it, and I am extremely excited for NS2. I already have the game pre-ordered, and if you are planning on getting NS2 at some point you should pre-order as well to get access to the upcoming beta.

There is nothing touched-up in these shots. Like editing with our tools, what you see is what you get! We hope you enjoy the style and direction we’re going in and these give you little flutters in your belly (excitement, that is). Now onto the more detailed description of the game’s status.

What used to be our biggest problem, environment artwork, is no longer a problem. We had a lot of difficulties transitioning from the texture-based levels of NS1 to the much more detailed prop-based levels in current generation games. Matt has done a great job leading the environment art and we now think we’ll have enough level textures and models for the first release of maps (based around our “refinery” art set). Our player models (including all the aliens and marines) are done. We’re cranking on weapon models and structures and we’re right on track with them. Animation remains a large task (we have two animators) but we’re bringing on a third animator now so we hope that will reduce the workload there. Our sound effects are going much faster than expected and sound fantastic. We’re just starting the score but we expect to have a full soundtrack when we ship.

Engine programming has been going really well, although there’s only so much a lone programmer (albeit, a programming genius) can do. So far Max has written about 80% of an entirely new engine and tool set from scratch. That includes the renderer, level editor, cinematic editor (used to make the teaser), Lua Debugger, networking, physics integration, animation system, auto-updater, builder and a whole bunch of smaller programs that tie everything together (not to mention performance and compatibility). Almost all of this is from scratch and it’s all designed to run on low end hardware and be cross-platform. It’s been really incredible to watch.

The great thing about the pre-orders is that they have allowed us to hire another programmer (although it took some time to find the right person) and he will help tremendously. I imagine there will be some significant relief and stress-reduction for Max to know that not quite everything is resting on his shoulders any more. Pre-orders have also allowed us to put the Heavy/Exoskeleton into the game, which was previously cut. We were also thinking seriously of cutting Dynamic Infestation but luckily we averted that.

Most of the game design is done and all the basic game systems are implemented. We still have more work to do on our particle system, weapon effects, Commander Mode interface and lots of little things like synching animations and sounds and that elusive “feel”. It’s surprising how even with so many great assets and so much tech, we still have so much to do to make this a great game.

Something that may not be apparent is that while it’s been 7 years since the release of NS1, it’s been a much shorter time that we’ve been actively working on NS2. After the 20+ patches (including some doozies), there was a lot of time trying to get this company funded. Max joined at the end of 2006 and that’s when things started moving. We got an office and were up to four people in April of 2007 and Cory joined us that summer. It’s pretty hard to develop a game without an Art Director, so artistically we’ve only really been working since then (previous artwork was scrapped). Even then, we didn’t have any animators, modelers or level designers. Only in the past few months have we actually had more or less a full team working on the game.

So it’s been a long road and a heck of a lot of work, but we know we’re on the right track. Halloween is always a special time for us, as it makes us remember back when we launched a gutsy, laggy game called Natural Selection. I know many of you who are reading this played on that night and have supported us through all our ups and downs. If you like what we’re doing and still believe in what we’re doing, please consider pre-ordering if you haven’t yet. We want to make sure we’re not saying the same thing next Halloween…

It’s good to have you with us.