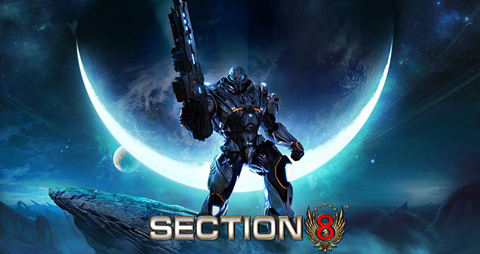 Well, now that the game has reached open beta I can safely talk about my impressions on the game without fear of the NDA. Keep in mind, in no way is this to be considered a review of Section 8. I only had access to the closed beta which consisted of only a few multiplayer maps with no single player content at all. Only if I pick up a copy of the game and spend more time with it would I even consider reviewing it. Anyway, on to my impressions:

Overall, Section 8 is a pretty interesting game, but it is not what I was hoping it would be. All of the general gameplay ideas here are pretty good, and it borrows a number of mechanics from some of my favorite games. For example, the jetpacks remind me of Tribes and the burning-in spawn system is similar to the hot drop system from Planetside. When it comes down to it, most (if not all) of the various gameplay elements in Section 8 have been in other games in one form or another. So while the game has an interesting mix, it’s not the revolutionary first person shooter the promotional material has marketed it as.

Graphically the game only looks alright. There is nothing really impressive about the game’s visuals, but it is not ugly by any means. The draw distance and scale of some maps can be pretty impressive, but the overall design is generally generic sci-fi. However, the good news is that the graphics engine runs super smooth. With all of the settings maxed out I was getting well over 100 fps at all times. Bad performance can ruin online shooters, so this is great news for those of you with older systems.

Section 8 offers a pretty good amount of customization when it comes to creating your character. There are 6 total weapons, of which you can chose two to use. There are also a number of gadgets that you can pick two of such as repair tools, hand grenades, sensor jammers, and hand thrown mortars. Perhaps the most interesting thing that the game has going for it are the passive modules it allows you to install in your armor. These passive modules, of which there are 9 total, give your player various buffs. For example, Polarity Chargers give you +5% to run speed, +15% to Jetpack Recharge and +12% to Shield Capacity. You could put all of your points into modules that increase your damage making you extremely lethal in one on one combat. However by doing so you would be neglecting armor and shield buffs, meaning you would not stand a chance if engaged by more then one opponent. Choosing which modules to install in your limited slots really changes how well you will do in various combat situations and ultimately is the most interesting aspect of character creation.

The main game objective is to control various points on the map. Capturing these points gives your team points, and the first team to reach 1,000 points wins the match. This is very similar to the Battlefield games, although it is a bit backwards in that you are trying to gain points instead of reducing the other team to zero. While battling to control these points, you and your team members gain requisition points as well as earning feats from killing enemies. The points can be spent on various deployables, such as turrets or tanks which are dropped in from orbit. Feats go towards unlocking Dynamic Combat Missions (DCMs), which are essentially secondary objectives that pop up during matches. These can range from escorting a VIP from one point of the map to another, to capturing the enemy’s intelligence that spawns on the map. Completing these objectives will gain points for your team. However, for every DCM your team spawns, the enemy team will be notified and will to try to stop you. If you fail to complete it, they will get the points instead of you.

Again, all of this is pretty interesting. But my major complaint about the game is that it is just so incredibly slow. Jetpacks and sprinting take ages to recharge even with modules to increase their recharge rate. The walking speed is painfully slow, and the weapons don’t seem to do a lot of damage. At long ranges, bullets only damage an enemy’s shields while at close range many guns begin to pierce shields and do damage directly to armor. As such, long range fights last even longer. A lot of the combat boils down to you and your opponent slowly strafing each other while shooting tons of ammo. The game also has a lock on feature that is essentially a time limited auto-aim. If one person jetpacks up into the air, you can be pretty sure the other will simply lock onto you as you fly over their head. It simply takes too long to kill other players, and you are so slow that aiming becomes extremely easy. Whoever wins often depends in large part to who locks on first or whose passive module selection gives them the advantage. That’s not to say that there is no skill at all in the game. Good use of your jetpack and gadgets like the mortar still count for something, but I would say that Section 8 is one of the easier games I have played in a while.

Maybe it’s just because I am used to faster games like Tribes and Quake, but I found the combat in Section 8 to be boring at times. There is just nothing thrilling about walking around slowly, casually shooting 30 rounds into someone before they go down. I like the thrill Tribes gives me of flying around the level at 60+ MPH and shooting people out of the air. Section 8 just feels so lethargic by comparison. Even Planetside feels a lot faster and more tactical since you have to make good use of cover. Section 8 maps do have cover in them, but unless you happen to be right next to some when you get into a fight, there is no chance you will be able to slowly walk over to something and hide behind it.

That being said, I still did enjoy the time I spent with the beta. There is no way I would have put the amount of time into it that I did if I wasn’t having some fun. From the discussions I was having with the other players in the game, some of them really seem to be enjoying the game a ton. Some even claim it’s the best game ever. Section 8 just turned out differently then I was hoping. If they would increase the movement speed and the weapon damage and take out the lock on I would be all over this game as the rest of it is pretty cool. I am still considering picking it up, but I am not sure if it’s something I would play long term. I guess I will just wait and see how much more content the full game has in comparison to the beta and make my choice then. So bottom line: if the game looked interesting to you before, or if you are just tired of the more generic shooters out there, give Section 8 a try. While its not exactly my cup of tea, there is a good chance you might like its blend.