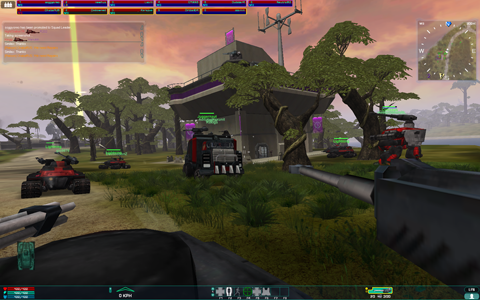 I recently got an e-mail from Sony Online letting me know that in an attempt to get people to subscribe to the game they are allowing old players to log in and play for free until August 26, 2009. I have always loved this game, as it offers an experience that you just cannot get with any other first person shooter out there. The massive battles over huge continents are still extremely fun, and they have added a lot of new content over the years to keep the game interesting. According to Xfire I have put spent over 250 hours in Planetside, so you can imagine how glad I was to hear that they reactivated accounts. In fact, I had been considering subscribing again for a while now.

Thank god that I did not. Planetside is a horrible, broken, buggy mess for anyone running the game on Windows Vista, and I can’t imagine it is any better for those running Windows 7 RC. The Tech Support for the game is non-existent in their support forums despite pages upon pages of people with issues. Considering that Windows Vista came out in Jan 07 and that the game is still not fixed years later, I think its safe to say that SOE has no plans on fixing their game or offering any real support of any kind.

The biggest problem with Planetside is that in order to get it to run you have to run the game in Windows 98 Compatibility mode. This is the only solution offered by their tech support on the forums, and doing so causes terrible performance in the game. This is probably because it limits multi-core processors to a single core, reduces your maximum memory, and runs the game via Windows 98 emulation, slowing things down to a crawl. On my new PC with a quad core processor, 4gb of ram, and a Nvidia 9800GTX+ graphics card the game runs worse then it did years ago on my old pc with a P4 2.5GHZ processor, 512mb of ram, and a 64mb GeForce 4. In large firefights I often get performance as poor as 10 frames per second.

As if poor performance wasn’t enough, the game is also subject to constant crashes. Unlike the performance issues, these crashes are common on Windows XP as well as Vista. The game commonly has problems when game textures or map elements suddenly become corrupted and appear completely white. This is followed shortly by the game locking up. This issue appears to be pretty common based on the number of threads that exist about it in the support forums, and I have personally experienced these issues many times on both my Vista PC and my XP Laptop.

It really is shocking that a company like SOE would take a customer’s money for a game that flat out is broken on modern PCs, and make no attempt whatsoever at patching the game. They also do not provide any warnings that Vista is not supported before buying/subscribing to the game. It pains me to say it, because I really do love this game, but I highly recommend that everyone avoid Planetside given its current state. I would love to be able to recommend it once again, but it doesn’t appear that it will ever be fixed.

*Update*: It looks like these issues will be fixed, see PlanetSide Sequel in the Works, Vista Patch Incoming