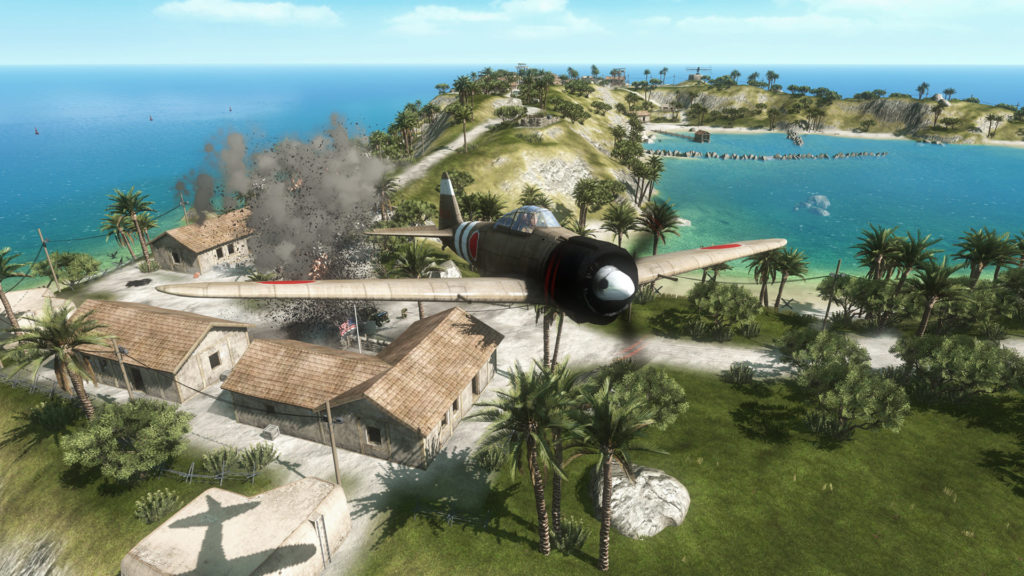 Compared to the full priced Battlefield games, 1943 is more of a focused experience. There are only three classes, four vehicles, and three maps. The player count has been reduced to 12 on 12, and there is only one mode of play called Conquest. In some ways this can be considered a good thing, as DICE has essentially stripped away all of the unnecessary complication that has gone into the games over the years and what we are left with is Battlefield at its purest, which is what made the games so fun to play in the first place.

All three of the maps in Battlefield 1943 take place on islands in the Pacific Theater. Wake Island, Guadalcanal, and Iwo Jima are all beautiful remakes of classic maps Battlefield 1942, and they play great with 1943’s player count. On these maps the United States Marine Corps face off against the Imperial Japanese Navy in a struggle to capture 5 control points on each map. Each team has what is essentially a life bar. Capturing control points and killing enemies causes the opposing team’s bar to tick down, and the first team to reach zero loses. 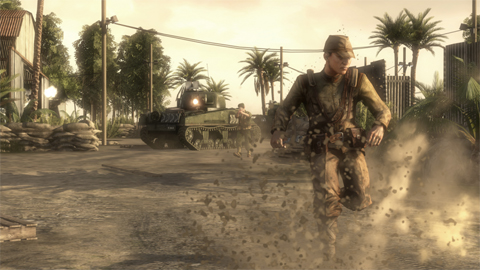 Each team has three different classes that players can choose from each time they respawn: rifleman, infantry, and scout. Riflemen are generally good at mid-range and have a grenade launcher attachment for their rifle. Infantry has a machine gun for close range, a rocket launcher to take out vehicles, and a wrench to repair vehicles. Lastly, the scout has a sniper rifle and can drop remotely detonated explosives to set traps.

Longtime Battlefield players might notice that there is no longer a medic, which is because health now automatically regenerates over time if you stay out of fire. However, the health regeneration is balanced by the speed at which you can get killed. Also, all of the guns now have unlimited ammo, which removes the need for a support class. This is balanced by somewhat long reload times on the weapons. More powerful weapons like the rocket launcher even have a cool down timer that prevents you from overusing them. Overall, the player classes in 1943 are balanced pretty well, and all of them are fun to play as.

Regardless of what class you chose, all of them can control any of the four vehicles in the game. The tank can hold two players and can lay down some heavy firepower with the driver firing tank rounds and a machine gun while the passenger fires a secondary machine gun. The jeep is a fast three man transport with an anti-infantry machine gun mounted on it. The airplane has air to ground bombs as well as machine guns for shooting down other planes. Lastly, there are transport boats that have two machine guns mounted to them and can carry a total of 6 passengers. 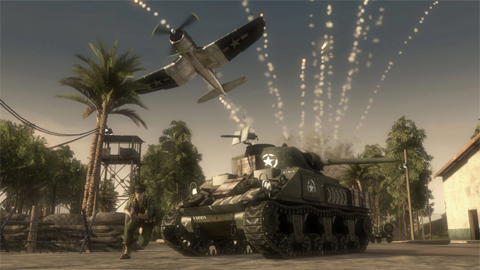 Each map has an air raid bunker which can be used to call in three bombers. While they are not flown by the player, he or she does get to choose where the bombs are dropped, causing a huge amount of destruction over a pretty large area. Also scattered around the maps are anti-aircraft guns which are extremely effective at shooting down enemy aircraft as well as incoming bombing runs.

The game also has a number of features that make the game a lot easier to get into and play. There is a squad spawn option that allows you to spawn near your teammates instead of just control points that you own. This makes it a lot easier to stick together with your friends and work as a team.

Battlefield 1943 is powered by the same Frostbite engine that was used in Battlefield: Bad Company. As such the game can be pretty gorgeous at times with great water, fire, and smoke effects. The Frostbite engine also provides the game with destructible environments. Nearly everything, from trees and fences to the walls of buildings, can be destroyed with explosives. It is pretty cool to see how these beautiful island maps get completely destroyed as the battle rages on. The destructible environments aren’t just cosmetic either, as it makes camping more difficult when the cover you are hiding behind can be blown away by a tank. The game also makes great use of audio. All of the weapons and explosions sound wonderful. The distant gunfire and explosives sound particularly good. Overall, the presentation is superb, especially for a downloadable title. 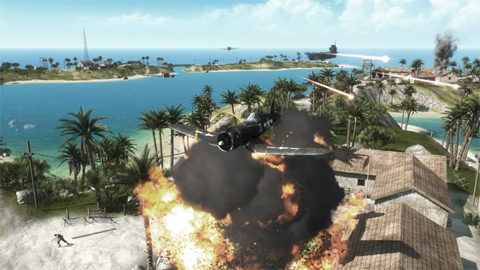 In the end, Battlefield 1943 is a great game. It might not be as featured as full retail Battlefield games, but it still has all of the core gameplay elements that have made the series so popular in the first place. It is a bit of a shame that there are only three Conquest maps, but I would also be surprised if DICE does not offer more as DLC at some point in the future (although expect to pay for them). Battlefield 1943 is the type of game that you can easily lose track of time in, and $15 seems like more then a fair price to pay for what you get.