I remember that all the way back in 2006 I posted about XNA Game Studio. Based on a friend’s suggestion, I downloaded XNA and was able to code a simple game of pong in just a few hours. Impressed with how nice the API was, I set out to make a few more simple games with it. If you have followed my blog all of these years you already know that nothing came out of that. The trouble was that even though I was all ready to go, XNA was relatively new. As such, there was a huge lack of any quality tutorials or documentation. So I figured I would wait a while and give it some time before giving it another shot. Well, now is the time.

Now that Community Games on Xbox Live is a reality, I really feel motivated to get something together. Plus, I can’t help but look at what is currently available and think, “I could easily do better then this stuff”. So after reading a bunch of documentation and tutorials, and creating a few small practice projects, I have begun work on a 2D Tile Engine. My roommate, who is an English major, has been dying to write a story for a game, and a 2D RPG would be a great chance for us to collaborate. Anyway, I don’t actually have anything to show yet, just a few base classes for a 2D Tile engine, which wouldn’t be of any interest to anyone here. But I do have some basic layered rendering working after only a few hours, so that is pretty encouraging. I am not one of those people that will post every little update. So don’t expect any more news on this until I have something noteworthy to show off. Until then, I will leave you all with a simple screenshot of a test project I did after reading a bunch of tutorials and documentation. This too only took a 5 or 6 hours (XNA is awesome). 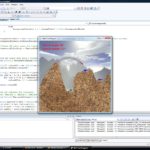 For another programming project I have posted about, check out the MSP Conversion app.