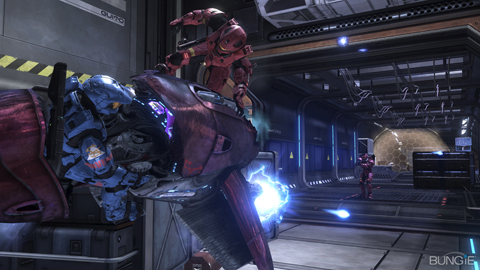 The Mythic Map Pack, containing three new multiplayer maps, is available for download on Xbox Live Marketplace today. Those who bought the limited edition of Halo Wars got these maps early, but they are now available to the rest of us for 800 Microsoft Points. This is actually pretty good timing, since I just recently got back into playing Halo 3 with some of my friends. Perhaps I will finally get enough footage to make a Halo 3 video like I was planning on doing before.

The three maps included in the Mythic Map Pack are:

Assembly: There aren’t too many small maps for Halo 3, a problem that Assembly is here to fix. While not a remake, nor inspired by any previous maps, Assembly is reminiscent of Wizard/Warlock found in the first and second Halo. The map is circular with two easily traversed levels. You’ll want to spend most of your time on the upper level, where all the power-ups, equipment, and power weapons are.

Orbital: This is a really unique map for the Halo universe, and it’s quite difficult to describe. It’s layout is like placing two U-shapes on top of each other, with one slightly offset. A base lies at the end of each U, and there are two routes to the other base, one high and one low. You can switch between the routes at a few points, and at the apex of each is a power weapon. Aesthetically, Orbital is one of the prettiest maps the game has to offer. It’s original in that, while the Human architecture and color scheme is familiar, it looks nothing like the Human levels in the game. If anything, it resembles the Cairo Station from Halo 2. There’s a lot to see here, with tons of little details.

Sandbox: The most exciting part of the Mythic Map Pack is the potential in Sandbox. Much like the Foundry map, Sandbox is completely Forge-able, the default map being made of objects which can be wiped out to create a blank slate. Unlike Foundry, however, Sandbox is outdoors and absolutely enormous. In addition to the ground level, Bungie has added a massive underground area (referred to as the “crypt,” it’s perfect for Grifball), and an unimaginably large amount of space to play with in the sky.