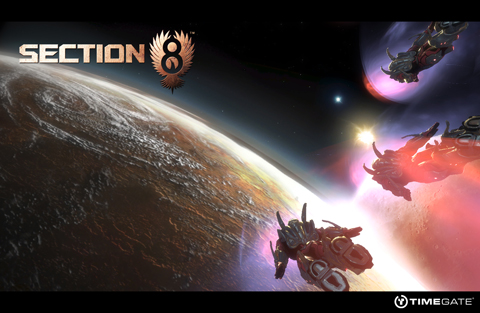 Wow! How did this take so long to come to my attention? As someone who is such a huge fan of Tribes (or anything Tribes like), you would think I would have heard about this ages ago. I know it’s not because I am not looking, because I keep really up to date with all the gaming news. For whatever reason they are not promoting this much, but they really should be because this game looks awesome.

The game has a single player campaign, but what I am really interested in is the 16-player multiplayer. The big hook that Section 8 has is its “burn-in” spawning system. Basically, it lets you spawn at any point on the large outdoor maps by dropping in from low orbit aircraft. When the game starts off, the whole map is neutral and up for grabs. This allows for a lot of strategy at the start of a match. Will your team roll together as a group, or split up into teams and go to different locations? Or perhaps your team will scatter across the entire map. As teams take control of parts of the level, they get marked dangerous and get equipped with anti-air turrets to discourage aerial drops. In addition to dropping in, all of the players will have jetpacks which further increase their mobility.

When you capture objectives or complete Dynamic Combat Missions (DCMs), you earn Requisition Points that are used to purchase equipment such as armor types, vehicles, turrets, sensors, ect. These items are dropped in as well, allowing you to put them anywhere that you see fit. The Requisition Points give you flexibility you to build your own classes and outposts as you complete objectives.

While the game is going on, it will randomly generate optional DCMs. These cover a variety of objectives, such as VIP escort missions, escorting convoys. The enemy team will have opposite objectives, such as killing the VIP. Completing these objectives can give you Requisition Points (or other benefits), so they are generally worth doing.

That’s about all that has been said about the game so far. But even though there isn’t a lot of info available, I am really looking forward to this game. If all goes well, perhaps I will get a spiritual successor of sorts to the Tribes series (since it’s obvious that VU Games doesn’t care about that series at all).