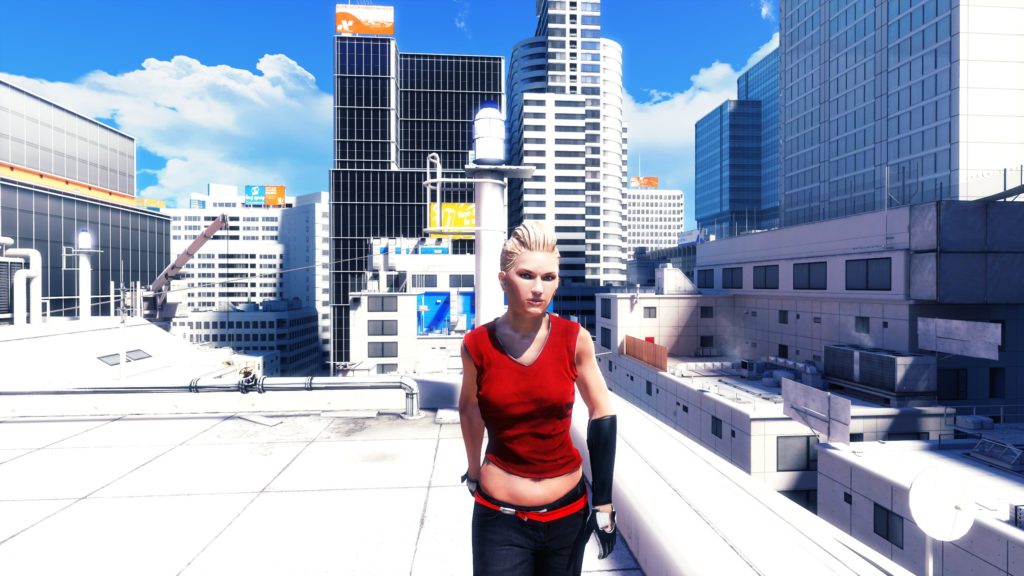 Mirror’s Edge, a first person action-adventure from Digital Illusions, is a game unlike anything you have seen before. Set in a society where communication is heavily monitored by a totalitarian regime, you play as Faith – one of many runners who transport messages while evading government surveillance. Inspired by Parkour, the gameplay is based primarily on running across rooftops and interior spaces in an attempt to get from point A to point B while avoiding the police. As such, there is a heavy emphasis on movement, such as maintaining momentum and fluidly chaining together moves. There is a bit of gunplay, however Faith is not very effective in combat and the game teaches you early on that it is always best to avoid conflict.

At first glance, the setting of Mirror’s Edge sounds pretty interesting, but the storyline is actually pretty boring. Your sister has been framed of murder, there are mumblings about a secret project called “Icarus”, and it’s up to you to clear your sister’s name and uncover what exactly that secret project is. Most of the story is told in stylized vector art cutscenes that actually look really cool, but the actual content is boring. Throughout the game you will meet a handful of forgettable characters that seem to exist only to provide a few lines of exposition before you move on. It’s hard to have any attachment to any of the characters (Faith included), making it difficult to care about the plot.

Moving around these environments is generally fun thanks to some well thought-out controls. Instead of requiring complex button combinations to pull off Faith’s crazy acrobatics, most are mapped to one of two buttons: move up and move down. These actions are context sensitive, so what they do will depend on what state Faith is currently in. If you are on a pipe, pressing up will climb and pressing down will slide. While she is running, pressing up will cause her to jump while pressing down will cause her to kick. It is all very intuitive and easy to wrap your head around after only a few minutes in the tutorial level. 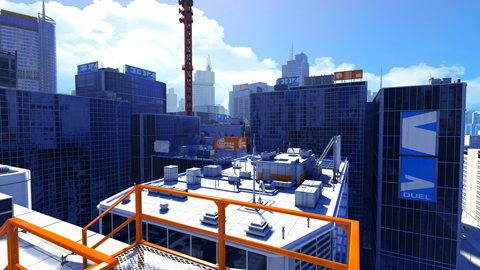 Everything about the game’s presentation screams high production values, especially the visual style which is just as unique as the gameplay. The city is filled with giant skyscrapers made of cement, glass, and steal, all brightly light and saturated with solid colors. Its not just all for looks either, important buildings and areas often use color to contrast with the rest of the city while “runner’s vision” highlights important objects and doors with bright red. The game is at its best when the controls and runner vision all come together. You will find yourself flying around rooftops, keeping momentum, making crazy jumps, sliding under obstacles, and running along walls all while dodging bullets. However, when things don’t come together it really drags the whole game down.

There are far too many instances when there is no obvious place for you to go. You might see your final destination in the distance, but how to get there is completely baffling. This grinds the fast gameplay to a halt and causes a lot of frustration. Sure, you can take your time and simply stumble around until you come upon where you are supposed to go, but who wants to do that? What’s even more annoying are the sequences when you are being chased by police and don’t know where to go. They will kill you in a few shots, making exploring very difficult. It can get really maddening. This game has way too many trial and error sequences, where you will repeat the same stretch of game over and over again while you try to figure out what the level designer intended you to do. The main cause of this problem is that the levels are extremely linear. Adding more routes around the environment would have gone a long way towards alleviating these headaches.

The level design starts off great, gradually teaching the player how to string together moves in really awesome ways. The subway level in particular sticks out in my mind as being exceptional. The problem is that after the first few levels, the designers have shown all of their cards and the game becomes extremely repetitive. The real problem is that while the Parkour elements of Mirror’s Edge are fun, it’s simply not enough to base an entire game on. After the novelty of the first person platforming has worn off, there is really nothing left to keep your attention. A good story would have helped a bit, but it still would not have addressed the core problem. 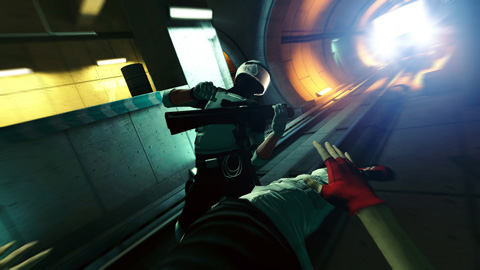 It also doesn’t help that the game occasionally forces you into confrontations with the police where the only real way to make progress is to kill all of them. Faith is extremely weak, and can be permanently downed by only a few shots or two punches. You never start levels with weapons, meaning the only way to get armed is to close the gap on a cop, while attempting to dodge bullets and disarm him. If he has any buddies in the area, as they often do, this can become extremely difficult to pull off. Even if you do manage to get your hands on a gun, you only have the ammo that is left in the clip. Once it’s gone, Faith throws it away and you are back to trying to take down cops with ranged weapons using only your fists, feet, and frail body.

It really hurts me to give Mirror’s Edge a mediocre review. As someone who plays a lot of games, it’s refreshing to see new ideas and intellectual properties. Mirror’s Edge is one of those games that when its fun, it is really fun. It’s just unfortunate that the overall game is more frustrating then it was enjoyable. If you are someone who rates games simply based on how fun it is, Mirror’s Edge is a game that you should pass on. However if gaming is more of a hobby then a simple diversion, Mirror’s Edge is worth checking out simply to experience its unique ideas, both in gameplay and in visual design. Just don’t expect to have a lot of fun while doing it.