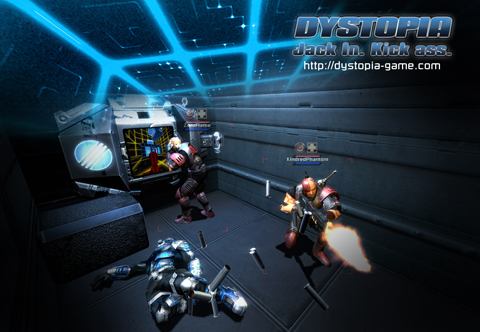 Dystopia version 1.2 has been released, and is now one of the first mods to use Valve’s Steamworks system.

Dystopia takes place in a high-tech futuristic world spanned by computer networks. It revolves around the conflict between two factions, the Punk Mercenaries (Punks) and the Corporate Security Forces (Corps). Players choose to join either of these two factions and battle against each other in tense combat situations in two parallel environments, the physical world (Meatspace) and virtual world (Cyberspace) with actions in one having an effect on the other, and vice versa. The gameplay is objective focused in which both the Punks and the Corps fight against each other to complete a series of objectives in order to win the round, with one team’s objectives normally preventing the opposing team from completing their objectives. Both teams are given a set amount of time to complete the map’s objectives, with one team attacking whilst the other team defends. The attacking team must capture all of the defending team’s objectives before the time runs out, whilst the defending team must prevent the attacking team from capturing their objectives.

Clocking in at almost 5 minutes, this trailer provides an amazing overview of 1.2 for both returning players and newcomers just getting up to speed with Dystopia. Also, the new player guide goes over all of the new features for new players, and old players alike. Be sure to check it out!