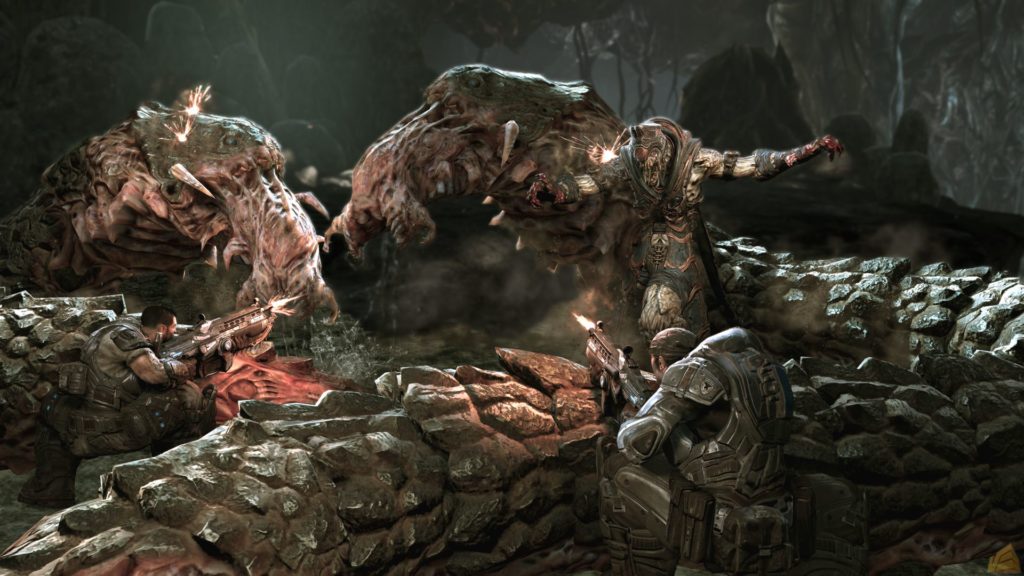 When Gears of War 2 was far enough along in development that it became time to start promoting, Epic Games constantly made use of the tagline “Bigger, Badder, and More Badass” to describe it. When I first heard this I rolled my eyes, but it turns out that this is actually a pretty good way to describe Gears 2. It takes everything that Gears 1 did well, throws in more enemies, weapons, vehicles, ect, and turns the action up to a level I have never seen before. Gears of War 2 is honestly the most epic and intense game I have ever seen, and is a blast to play from beginning to end.

I think most would agree that the storyline in the first game wasn’t all that great. It provided the player with enough of a reason to keep playing, but did little else to pull you into the universe. Epic Games said they gave the storyline a lot more attention this time around, and it really does show. In addition to learning a lot more about the universe itself, the story carries some emotional weight that actually manages to pay off. Many questions from the first game are answered (or at least made clearer), while new (and more interesting) questions are asked. Don’t get me wrong, the plot isn’t going to win any awards, but it is on par with a good summer action blockbuster.

Gears of War 2 takes place months after the events of first game. It turns out that the Lightmass bomb didn’t do as much damage as the COG hoped. After a short period of peace, the locusts have returned in larger numbers than before. They now have some new weapon that is capable of sinking entire cities, and the city of Jacinto in one of the only remaining safe places for humans to live. However, there are signs that the Locusts are getting ready to sink that city as well. Humanity’s only hope is to launch one final massive offensive against the locusts, and hit them on their home turf. And what an amazingly epic battle that is.

The word “epic” gets thrown around a bit too much these days, but if there is one game that deserves to be described as such, Gears of War 2 is it. The thing that really stuck me while playing Gears 2 is just how intense and unrelenting the action is. After beating the game I literally felt tired, as if I was actually there fighting along with Marcus and the rest of Delta Squad. The scale of the battles is huge; its just one massive set piece battle after another from start to end. There are very few moments when the action slows down. The game hits the ground running and never lets you catch your breath. Plus, no other game has ever given me such a sense of being a small (although important) part of a huge war.

There is a lot more scenery this time around as well. While the first game mostly took place in destroyed urban settings, Gears 2 takes you out of the cities for the majority of the game. You will find yourself fighting everywhere from a snowed covered mountain town to deep underground locust cities. There are some other incredible locations, but I wouldn’t want to spoil anything here. So lets just say you wont believe some of the places that you end up in.

The gameplay from the first game was extremely solid, so there aren’t many major changes. However, the new weapons, enemies and vehicles go a long way towards making the game feel new and fresh. The new enemies come with new AI, making each one require a unique strategy to defeat, while new weapons open up new combat opportunities. Most of the actual gameplay changes or additions deal with how cover works. A new shield has been added to the game, allowing players to advance on enemies while remaining in cover. Downed enemies can be picked up to be used as “meatshields”, also adding to the idea of movable cover. Some cover is now partially destructible, making you slightly more vulnerable as you come under fire. There have also been numerous tweaks to other gameplay systems, such as bullets having stopping power (slowing enemies down), or smoke grenades knocking down nearby enemies when they explode.

All of the new gameplay additions and changes come together really well. Thanks to great controls you will find yourself jumping from cover to cover, blindfiring around corners, tossing grenades and sniping with pinpoint accuracy in no time at all. The new enemies are challenging, the new vehicles are fun to drive, and the new weapons are enjoyable to use. The only real disappointments in the gameplay department are the new bosses. While they are pretty epic, they are simply too easy to defeat. All of them have some small trick, and once you figure that out they are laughably easy to defeat. They just lose a lot of their awe when you realize how easy they are. For example, you would expect the massive final boss to be extremely tough, but instead it is probably one of the easiest boss battles in any game to date.

Graphically, the game looks great from both a technical and artistic point of view. There were numerous points throughout the game when I was stunned that the Xbox 360 can output such amazing visuals. From the level of detail on every surface, to the improved lighting, to just all the “stuff” on the screen at once, I was just constantly impressed with what I was seeing. Plus, the new locations gave the artists the opportunity to add some much needed color. Compared to the first game, Gears 2 makes vivid use of colors.

The multiplayer in the first game was admittedly a bit of an afterthought. Despite this, the online action in Gears 1 was extremely addicting and kept players (myself included) playing for many months after the game’s release date. This time around, there was clearly a large focus on the online aspect. In addition to some really well designed multiplayer maps, the game also features many new gameplay modes as well as a higher player count. The most interesting new mode is called Horde. In this mode, you and your friends team up against wave after wave of increasingly difficult locusts. It has a very arcade like feel to it, and it is really addicting and infinitely repayable. Getting to the end requires not only skill but good teamwork as well, since the amount of enemies you face off against would be overwhelming by yourself. The game also has a great matchmaking system which is similar to the one found in the Halo games, allowing groups of friends to easily move from one match to another without ever sorting through a list of servers. If Gears 1 kept you playing for months, expect Gears 2 to keep you busy for years.

Overall, Gears of War 2 is pretty much flawless. The single player game is relentlessly action packed, while the multiplayer offers a lot of lasting value. The only real disappointment I came across were the boss battles, but when taken with the rest of the game, it’s really only a minor complaint that didn’t inhibit my overall enjoyment. If you like action games at all, Gears of War 2 is a game that you cannot miss.