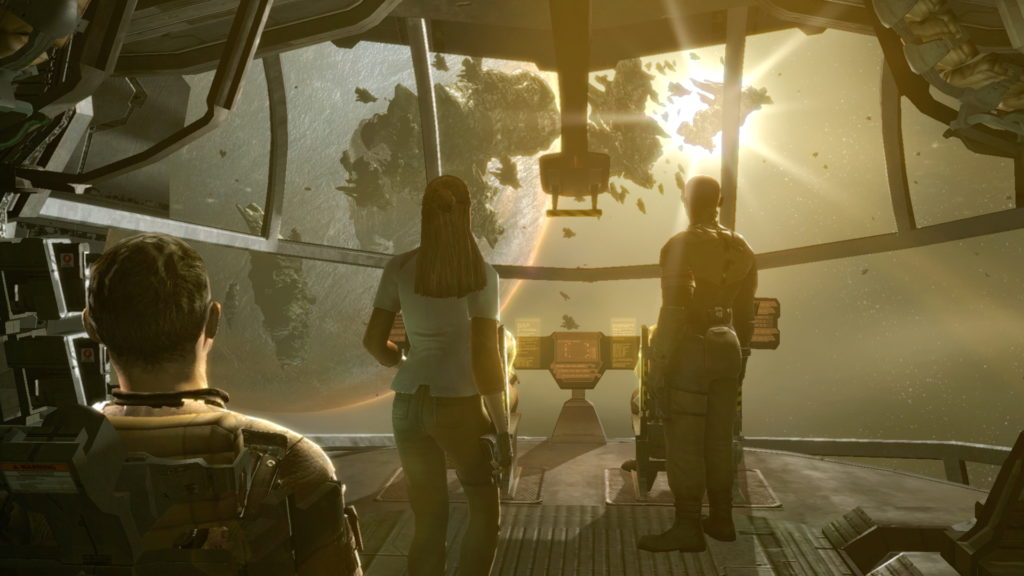 It’s always interesting when a big publisher like EA decides to create a new intellectual property. It’s not often that they do it, and it always seems to turn out one of two ways: awful or amazing. The good news is that you can count Dead Space in the amazing category, as everything the game does it does well.

Dead Space is a sci-fi survival horror game that takes place aboard the USG Ishimura, a “planetcracker” mining ship. It appears that in the future, Earth is disparately low on resources. So these city sized ships go around the solar system, and literally tear apart other planets for their resources. Communication with the ship has been lost, however everyone expects a simple communications system failure. Enter Isaac Clarke, part of a 5 person engineering team dispatched to repair the communications system. Clark’s girlfriend is aboard the Ishimura, giving him even more reason to be on this assignment.

Shortly after making visual contact with the Ishimura, a landing mishap damages your ship, and leaves you stranded. Strangely, no one is there to greet you as you exit the docking bay and proceed through the facility. Shortly after, your priorities quickly shift from repairing the ship to saving your own ass as your team is attacked by a few Necromorphs, which are strange creatures that seem to have taken over the ship. As you progress through the game, you will come across numerous audio and text logs that can be used to piece together what happened between the time they lost communications and now. The story isn’t exactly memorable, but it is interesting enough to keep you pressing forward, and there are some pretty cool parts.

Games with plots such as these live and die based on the atmosphere they are able to create, and Dead Space nails it. It appears they took some cues from System Shock 2, and created an extremely eerie atmosphere. The environment and audio design go a long way to creating an overwhelming sense of fear and dread. Plus, the ship feels very believable, with varying decks devoted to things like oxygen and food production or medical needs.

While the presentation is nailed, the level design has some problems. First, the game is almost completely linear. Objectives typically consist of finding objects you need to fix broken ship systems. Once you find the part you need, the door to the next area opens where you repeat the same process. This can get a bit tiring after a while and the game certainly would have benefited from more varied (and interesting) objectives. The game also has a fair amount of backtracking, although you usually end up exploring areas that were previously inaccessible. One aspect of the level design I was impressed with was the zero gravity environments. Some parts of the ship are completely gravity free, allowing you to walk on pretty much any surface. These rooms can be somewhat challenging to navigate, but they are fun nonetheless and add an interesting twist to combat.

The Necromorphs themselves are also pretty interesting. There is a good mix of different types, from small ones that aren’t all that threatening to larger ones that absorb ammo like a tank. Plus, there are some great boss fights thrown in for good measure. Although it is a bit disappointing that you see most of them within the first couple of hours of the game. However, they all behave pretty differently, with each requiring a different strategy to dispatch.

Fighting the Necromorphs is a lot of fun thanks to extremely tight controls. It took a little bit of time to get used to moving and aiming, but once you do the game controls great. You will be taking on groups of enemies, shooting off their limbs with ease. Or at least you better be, since shooting off limbs is the best way to take them down. EA has coined the term “strategic dismemberment” to describe how the combat works. Shooting enemies in the body or the head is generally the least effective way to dispatch them. In fact, shooting them in the head might be the worst thing you can do, as it often results in the enemy quickly charging you, swinging wildly in the air. Instead, you want to focus on removing limbs, such as legs, to slow enemies down and cause a lot of damage. This goes a long way towards giving the combat a fresh feeling.

Since your character is an engineer and you are on a mining ship, you end up using a lot of tools as weapons. The purpose of most of these tools is to rip rocks apart, so using them on flesh can be pretty brutal. The weapons ultimately do fit in to the typical weapon archetypes such as pistols and shotguns, however they are well disguised and are lot of fun to use. In addition to your weapons, your suit has a kinesis module that can be used to pick up and throw items as well as a stasis ability that can be used to temporarily freeze enemies.

Adding one more layer of depth to the game is the upgrade system. Everything from your weapons to your suit can be upgraded using power nodes. These nodes are scattered throughout the ship, so exploring is encouraged. On weapons, nodes can be used for improvements such as increased damage, capacity, or decreased reload time. On your suit, you can use nodes to increase your maximum health or air. They can also be used to enhance your stasis or kinesis abilities. The nodes are rare, so picking what to upgrade will be a big part of your strategy.

Last but not least is the game’s presentation. From a graphics standpoint the game looks great. Good use of lighting and animation bring the world to life very nicely. But what really impressed me was the game’s interface. Every menu in the game shows up as a holographic projection from your suit, so you are never taken out of the world when you go into your inventory, or read a text log. It probably doesn’t sound like a big deal, but once you start playing you will realize that it really adds to the immersion.

Overall, Dead Space is a great game. The atmosphere is incredible, the combat is extremely solid, and the presentation is beautiful. The game is only hindered by some overly linear level design and a somewhat mediocre story. But neither of those issues prevented me from enjoying the experience. Anyone who enjoys survival horror games needs to pick up a copy of Dead Space.