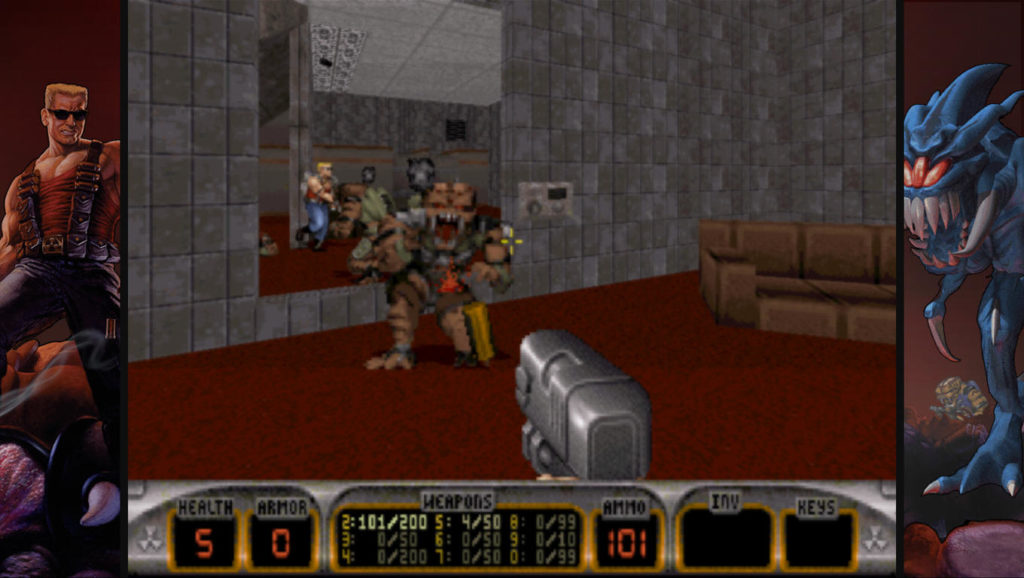 The original Duke Nukem 3D came out on January 29th, 1996, and was an instant success. The game featured some of the most interactive environments ever seen in a game, beautiful graphics, tons of enemies, and one kick-ass protagonist. The game is considered to be a classic, and it’s hard to find a top shooters list that doesn’t have the game on it. But the question is, does the gameplay still hold up today? The answer is an enthusiastic “Yes!” Thanks largely to great level design and explosive shooter mechanics, Duke Nukem 3D is a ton of fun.

The story of Duke Nukem 3D is a simple one: While Duke was away kicking ass in space, aliens came to earth to kidnap all the babes. Duke’s only option is to fight those alien bastards across 39 levels featuring settings such as Hollywood, Los Angeles, a moon base, and alien spacecraft. The level design is really what holds the game together. Every level is extremely creative, filled with enemies, items, and secrets. Despite the game not having a story, you still feel the desire to press on, if only to see where you will be going next.

The gunplay is lightning quick and has aged beautifully. It really makes you realize how little the shooter genre has changed over the years when a game this old still plays so well. Your arsenal of guns includes old favorites such as machine guns, shotguns, and rocket launchers, but there are some interesting ones thrown in as well. The Pipe Bombs, laser Trip Bombs, and freeze ray give the game some tactical depth. A personal favorite of mine, the Shrink Ray, allows you to miniaturize enemies before squashing them under your boot, what a mess! The only real complaint here is that some may find the game a bit too difficult at times. Duke Nukem 3D comes from an era of shooters where developers tried to kick your ass, so you will want to work on your reflexes.

Aside from weapons, Duke also has an inventory of various gadgets. A portable medkit allows players to heal themselves whenever they choose to. Steroids speed up player movement making transit through hostile territory easier. Nightvision goggles allow players to see enemies in the dark. The “HoloDuke” device projects a hologram of Duke that can be used to distract enemies. Protective boots allow the player to cross dangerously hot or toxic terrain. Scuba gear allows the player to take longer trips underwater. Perhaps most impressively, Duke’s trademark jetpack allows the player to range fully in 3D, often to reach hidden weapons caches or extra health.

But all of this equipment is nothing without enemies, and Duke Nukem 3D has a good variety of them. Enemies range from mutated humans to aliens, with a few boss fights thrown in for good measure. While the AI is pretty basic, the enemies do provide a good level of challenge, and the different enemies require different strategies to defeat. This keeps the combat in the game interesting throughout the entire experience.

Once you have finished with the single player campaign, Duke Nukem 3D supports online play over Xbox Live. Options include playing Deathmatch or the entire campaign co-op with up to eight players. The online play is not as deep as a game like Halo, but once again the great level design and frenetic action make it enjoyable. However, the online games are occasionally hit with terrible lag, making the match unplayable.

In addition to the Xbox Live play, this version of the game includes some other new features/enhancements. While playing (either solo or online), the game records a video clip of your session, allowing you to post them online for others to check out. What’s even more interesting is that if you die, you can rewind the clip of the game you were just playing, and take control at any point. This feature eliminates the need to save your game (although you can still save at any point if you chose to). Other updates include controller vibration, bilinear filtering, motion blur, and a slight quality upgrade to the music. If there is one real weakness about the game’s presentation then it’s the fact that the game does not fill up your entire screen. The game has borders on the sides in order to keep the game in the original aspect ratio.

Those who were hoping for a good port of the classic are going to be extremely pleased. The original game is completely intact, and the new additions make this the best version of the game yet. While those who never got the chance to experience the original now have a great reason to check it out.