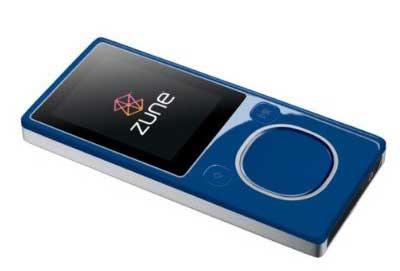 In addition to the new hardware, Microsoft is updating the Zune software with new features. And unlike the $10 Apple charged for an update to its iPod touch, all of the Microsoft updates are free.

Beginning on Sept. 16, a new feature called Buy from FM will allow users to, as the name suggests, tag a song being played on the radio for purchase. The service uses the Radio Data System and RT+ systems of digital song ID used by the U.K. and the U.S., respectively, to identify the song to the player. If the Zune is in the presence of a Wi-Fi hotpsot, the new Zune software will instantly connect it to the Zune Marketplace online store. A song tagged for purchase will also instantly be downloaded to the Zune.

Also new, the updated Zune will make recommendations based on the songs someone is listening to and there will also be new Zune “channels” programmed by experts and along themes like “work-out” music.

Other new features include support for Audible formatted media, and the ability to download audiobooks for the Zune. Also, games are now available for the Zune. The first two are Hexic and Texas Hold Em, both of which will be free.

Lastly, Microsoft has a subscription update: $14.99 per month allows an unlimited number of downloads or streaming, either to the Zune itself or to a PC.

And as always, current Zune owners can upgrade their Zune software and firmware to obtain the new features.