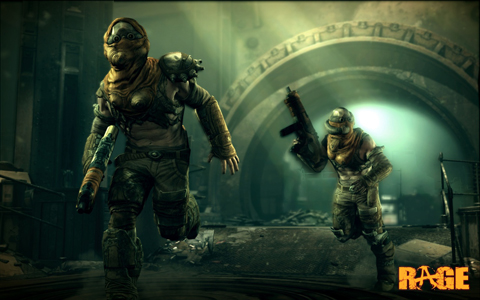 id Software’s new game, Rage, looks amazing. What first caught my attention is the stunning graphics and art design. It really is pretty striking and gives off a sorta Mad Max vibe (which is a really good thing). But then I started to read about the actual gameplay, and it sounds like Rage is going to be a fun game. However, I feel like most people don’t really know what the game is about.

Its obvious from the trailer that the game is set in a post-apocalyptic world akin to those seen in the movies Mad Max and The Road Warrior. Specifically, the game is set in the near future following a comet collision with the earth.

They knew the asteroid was coming, but no one expected total destruction. After it was confirmed that the asteroid would collide with Earth, the leaders of humanity secured a deep underground bunker. Its sole purpose was to house the future of the human race, leaders who would eventually rebuild the planet after the cataclysmic explosion.

The asteroid hit, destroying a large chunk of the planet, presumably wiping out all life on the surface. The survivors were supposed to open the doors of the bunker to a ruined planet and begin reshaping society on a new Earth. When they finally set foot on the surface, they quickly discovered they were not alone. Mutants stalked the desert wasteland, looking for their next victim, and were filled with rancor and hostility and what could only be described as…rage.

In addition to vicious mutants roaming the desert wasteland, several human factions have formed in makeshift cities across the land. You play as an as-yet-unnamed character who emerges from the bunker to restart society, only to see that many of these factions have their own vision of how to implement the new world order. Some are friendly, but many are not, and one in particular has risen to power and is attempting to put a stranglehold on the rights and freedoms of the survivors. Willits likens it to Mad Max Beyond Thunderdome. You’ll travel from makeshift city to makeshift city, learning more about each faction as you progress through the main storyline.

As seen in the many id Tech 5 demos and recent Rage trailers, driving will play a very large part in Rage. Over the course of the game, you’ll accumulate several different vehicles that can be customized to your liking. In the latest trailer, we saw dune buggies racing on a desert track, armed with mounted Gatling guns and machine guns. Willits said these vehicles will become an extension of the player, so expect plenty of options for customization.

Few concrete gameplay details have been released since the game’s announcement, but the developers did let a few extra details slip.