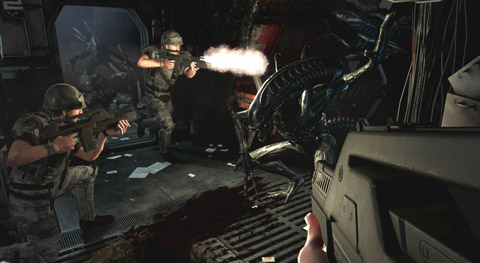 As many of my readers know, I am a big fan of the television show Battlestar Galactica. I think its one of the most intelligent and well written shows ever created. What you might not know is that I am also a big fan of the Aliens vs. Predator PC games. Walking around in dark, scary, environments while hunting/being hunted by aliens is extremely intense. So image how excited I was when I heard that two of the writers form Battlestar wrote the script for the Aliens: Colonial Marines game. In an interview with Shacknews, Randy Pitchford said:

One thing that’s cool is some of the people we’ve been able to work with to help us [on Aliens]. The guys that write the Battlestar Galactica series, Bradley Thompson and David Weddle, they wrote our script. They’re amazing guys. They gave us a lot, too. We could make a whole season of TV with the stuff they gave us. [laughs] We profited from the writer’s strike, let’s just put it that way. We talked with a lot of people, but those guys are so good.

And then a lot of the concept guys that helped make the movies. Like [Aliens concept artist] Syd Mead, that guy walks on water. And to be able to go to his studio, his house, and then have him draw a bunch of stuff. “Here’s when I designed the Sulaco back when we made the first movie. Here’s the original artwork. You want a copy, Brian?” And Brian’s like, “Yes.”

And now he’s designing all the new stuff, because the Sulaco’s a big ship and we only saw a bit of it, so you get the guy who designed it to design the rest of it. And he’s awesome, he designed so much stuff. And then like [concept artists] Keith Thompson, Craig Mullins.. anybody who knows these names knows what we’re talking about. This is no joke.

It’s a big team. And we’re also working with people from all over the world. We’ve been working with a lot of amazing talent at other studios. I don’t know how much of that will be used in PR, but there’s a lot of people who care about this franchise. The opportunity to build a dropship, or build a pulse rifle, or build a smart gun, that’s a pretty cool opportunity–a lot of artists would want to do that. So we have our core Gearbox team, but we’re also finding a lot of folks around the industry now, guys who are on top of their game.

It looks like this game is going to be amazing! Be sure to check their site out later for the full interview.

Aliens: Colonial Marines is an upcoming tactical shooter set in the Aliens universe, developed by Gearbox Software and published by SEGA. The game is in development for the Xbox 360, PlayStation 3, and PC and is scheduled to be released in the first quarter of 2009.