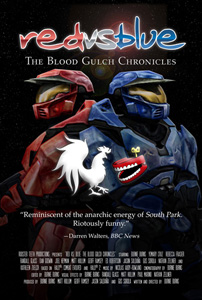 Red vs. Blue: The Blood Gulch Chronicles, often abbreviated as RvB, is a machinima comic science fiction video series created by Rooster Teeth Productions and distributed primarily through the Internet and DVD. The series chronicles the story of two opposing teams of soldiers fighting a civil war in the middle of a desolate box canyon (Blood Gulch), in a parody of first-person shooter (FPS) games, military life, and science fiction films.

Red vs. Blue centers on the Red and Blue Teams, two groups of soldiers engaged in a civil war. Each team occupies a small base in a box canyon known as Blood Gulch. According to Simmons (Gustavo Sorola), one of the Red Team soldiers, each team’s base exists only in response to the other team’s base. Although both teams generally dislike each other and have standing orders to defeat their opponents and capture their flag, neither team’s soldiers are usually motivated to fight each other- if they are otherwise, neither are efficient. Teammates have an array of eccentric personalities and often create more problems for each other than for their enemies. The main Red vs. Blue storyline spans five seasons.