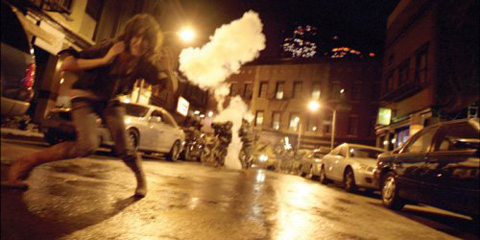 So, I went to see this movie yesterday. I read a lot of internet posts before going to see it and it seems that a lot of people loved it while a lot of people didn’t care for it. So I was prepared for it to go either way. But I am pleased to say that I absolutely loved this movie. It was easily the best one I have seen in months.

In general, it seems that most of the people who didn’t like the movie really shouldn’t have gone to see it in the first place, as it was clearly not the type of movie for them. And just because it’s not their type of movie, it doesn’t mean that others won’t love it.

For example, take the people who complain about the shaky camera footage. The trailer made it pretty clear that that’s how the whole movie was filmed as it was integral to the plot. If you knew that was going to be a problem then why even go watch it and then complain about it afterwards. Personally, the shaky camera didn’t hinder my enjoyment of the film at all. It was steady enough when it needed to be and overall it helped create some of the most intense moments in a film that I have ever seen.

Then there are those that complain that they don’t explain enough (such as what the monster is and where it came from). I feel like these people completely missed the premise of the movie. The whole film is being told from the perspective of a group of people caught in the middle of an attack. They aren’t supposed to know what is going on, and that just adds to the realism and intensity of the movie. You feel like you are actually there with them, trying to figure out what is happening and what to do next.

The only real complaint that I have heard that I will give some credit towards is that the ending is abrupt. I will agree that the ending wasn’t all that spectacular, but it wasn’t bad by any means. It wasn’t even all that surprising considering the whole premise of the movie (a video tape of the attack found afterwards).

Anyway, overall I must say that it’s a pretty awesome movie. Go in with reasonable expectations (knowing what the premise of the movie is and that it was a $30 million film, not a $150 million film like Transformers) and you will be come out of the theater satisfied.