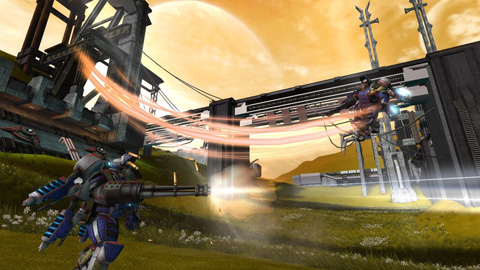 Fallen Empire: Legions. Thats the title of the new Tribes-like first person shooter being developed by GarageGames for their web browser-based games platform InstantAction. There has been speculation for a long time that GarageGames was working on a Tribes-like game. And just last month some early alpha footage of the game was leaked. But now GarageGames has officially announced the project, and it sounds pretty cool. IGN has a good interview with Tim Aste about the game:

IGN: Can you describe the basic concepts of the game, like how teams are comprised, how many per team, and what you need to do to win a match?

Tim Aste: With Legions, we set out to create a fast and furious online shooter. Now imagine that same game, but with a big freaking rocket strapped to your back. Freedom of movement is an integral part of the game concept; we wanted players to feel unrestrained by the world. If a player can see a spot where they wanted to go, we want them to get there easily.

Teams are composed several ways, depending on the game type. We haven’t locked down exact player counts, but in the end that will be determined by what is the most fun as we continue development. Like many people would expect of GarageGames, our tech can handle a lot of players, probably 64 per server, but from a design point of view, we’re focusing on more strategic, smaller team battles, so we’ll end up with smaller teams on each side.

This question is sort of hard to answer though. That’s because the most untraditional part of this game, is what we are calling “live development”. Doing this game through an integrated web platform like InstantAction allows us to develop the game in a manner similar to “episodic content.” I don’t really like using that term, but the concept is sort of similar. The plan is to launch a “core” game with a bunch of polished, fun gameplay packed in to start. From there, we fully intend to keep the development going, adding more and more over time. A lot of what happens will be in the player’s hands.

We’ll be starting out with a solid design, but will listen to player feedback, and keep this thing alive and growing over time, even though we’ll be delivering a lot of fun right from the start. We don’t want the game to get stale after a month.

IGN: When you say “in terms of graphics and gameplay it will set a new benchmark of what the future of gaming will be on the web” [in a press release] you’re making a bold claim, what exactly do you mean by this?

Tim Aste: Haha, yes that is pretty bold, but it’s also a very new concept. Traditionally, when you hear about “web games”, many people think of Flash games and casual games, simple 2D games that can be fun but are much, much less complex than most everyday 3D games. These are great and all, but we wanted more.

When we released Marble Blast Ultra on XBLA in early 2006, we were surprised by who was actually playing it. We were pretty shocked when we saw the people playing MBU were also playing much more “hardcore” games. We’ve thought for a long-time that there’s a large audience out there who would play what we call “gap games.” Gap games aren’t simple, tiny games, but they are not huge ten million dollar+ titles either… and they are anything but casual.

Legions is definitely a gap game– we’re not building a Crysis or Halo 3 here. We’re focused totally on the fun of the gameplay, and it doesn’t take a 100-man team to create a really fun, great looking, action game.

IGN: We see that there are jetpacks – can the same sort of terrain-hopping strategies in Tribes be used here? Any new techniques?

Tim Aste: Yes. GarageGames is well known for being founded by many key members of the Tribes development team at Dynamix, and our tech has history there. Fans of freedom of movement strategies will definitely like what we have in store.

IGN: How big are the stages?

Tim Aste: Pretty big! This ultimately will come down to making a compelling level design. In our early prototypes we found that having massive terrains was not always the best solution– even though moving around in the game is cool on its own merit, flying around by yourself just isn’t as much fun as blowing other people up while you’re at it. By the same token, areas that are too small feel constrained and unstrategic. In the end, we’re finding a medium ground which provides both an open range and a functional gameplay flow. I don’t know how big it is in terms of square kilometers, but it’s optimized for fun and strategy.

IGN: Is there a story behind the game? What is the setting?

Tim Aste: We hope to talk about this very soon as we get ready to discuss our “live development” content system.

IGN: What kinds of weapons can you use?

Tim Aste: We’ll be rolling out our early tests with the basics. Rocket launchers, grenade launchers, sniper rifles and chain guns. This plays into our live development strategy as well, so we don’t want to ruin all our surprises just yet!

You can read the rest of the interview over at IGN.