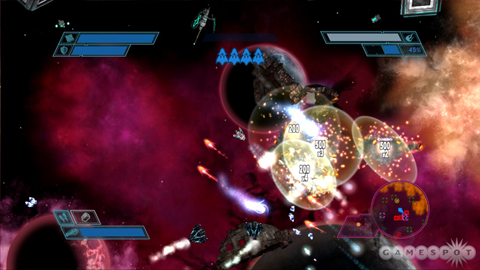 A little while back, Gamespot published a short preview of Shred Nebula by CrunchTime Games. What got me excited about the game is that James Goddard (CrunchTime Games’ Founder) noted that they a lot of inspiration was drawn from SubSpace in the creation of Shred Nebula, including multiple ships with different abilities and the similar flying mechanics. Other than that, not much is known about it except that it’s confirmed to be priced at 800 MS Point when it releases in early 2008.

This news should make a lot of PC gamers very happy, myself included. If you never played SubSpace, you can still check it out by using the Continuum client.

Don’t know what SubSpace is?

SubSpace is a two-dimensional space shooter computer game published in 1997 by Virgin Interactive Entertainment (VIE) which was a finalist for the Academy of Interactive Arts & Sciences Online Game of the Year Award in 1998. This game, now freeware, incorporates quasi-realistic zero-friction physics into a massively multiplayer online game through the Continuum game client. It is no longer operated by VIE; rather, it subsists by support from fans and players of the game, who provide servers and technical updates. The action is viewed from above, which presents challenges very different from those of a three-dimensional game. The game has no built-in story or set of goals; players may enter a variety of servers, each of which have differing objectives, maps, sounds, and graphics.

Although falling short of modern standards, SubSpace is widely considered an early entry in the massively multiplayer online genre due to its unprecedented player counts, as well as lead programmer Jeff Petersen’s apparent coining of the term.