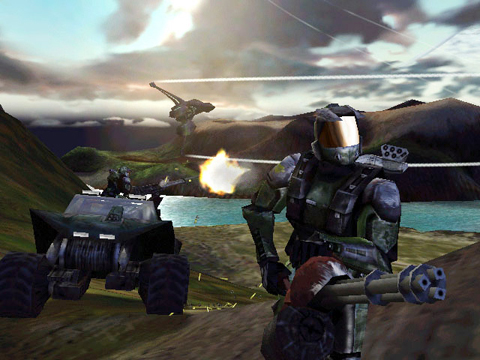 With the Halo 3 launch only a few days away, it is pretty neat to take a look back at the old Halo games to see how far the series has come. IGN is running a great article about the history of the Halo series, and I absolutely recommend checking it out. Also, be sure to check out the video at the end of the post. It contains some pretty cool footage of extremely early Halo builds. 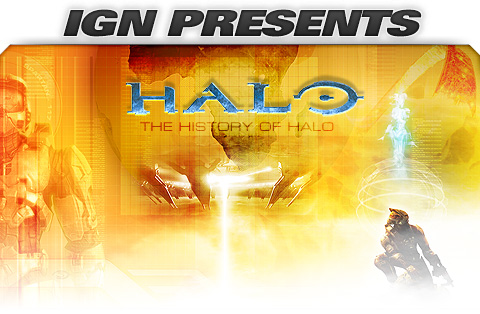 You know you’ve arrived when the universe paints a target on your back.

“Halo Killer” has become part of the gaming industry lexicon, a pipe dream floated by every wannabe developer hoping to make their bones by taking top honors away from the most successful first person shooter of all time. It’ll be a tough climb. As a series, Halo has sold more units faster than any other game in history. Over five billion matches have been played online. Dozens of awards. Hundreds of accolades. Halo was itself a game-changer, simultaneously putting a new and untested console on the map while announcing the end of PC-shooter dominance with authority.

The epic tale it wove was pure pulp sci-fi goodness. An interstellar war, Earth on the brink of defeat, the fate of the galaxy hinging on an ancient and mysterious alien artifact and one hope for survival remaining: a lone soldier of superhuman will and ability, fighting to turn the tide in humanity’s final hour. One man, one war. And that was just for openers.

When Bungie Studios finally deployed Master Chief Petty Officer John-117 in late 2001, everyone felt the lightning hit. The thunder was still to come.

University of Chicago student Alex Seropian had already published Gnop!, a humble Pong clone, and tank shooter Operation Desert Storm when he met fellow undergrad Jason Jones. Hungry for another project, they partnered in 1991 to create Minotaur: The Labyrinths of Crete, with no solid intentions beyond getting it done and out the door. Seven years later, as co-founders of Bungie Studios, they topped the admittedly-thin list of Mac developers with two stellar franchises to their name: real-time strategy Myth and first-person shooter Marathon.

Marathon took the relatively young FPS genre and added physics, dual-weapon wielding, networked multiplayer and, most improbably, a plot with objectives beyond “shoot everything, find door.” You were a nameless cyborg security officer in Mjolnir Mark IV armor, revived from stasis to defend the UESC Marathon from alien incursion, assisted (and hindered) by increasingly unstable AIs. Fans of open source, Jones and Seropian finished their popular trilogy by including the Forge and Anvil, level editors that put their design tools into gamers’ hands.

Myth II was in the bag. A longtime fan of old school science fiction, Jones fired up a new project at the Chicago office: an RTS envisioned as a sci-fi variation on Myth, chronicling a desperate war on a distant planet… called Solipsis. Also the name of the game itself: “One of many.” The Crystal Palace, Hard Vacuum, Star Maker, Star Shield, and The Santa Machine all took their turn.

It went to a rough build before everyone decided moving tiny army men around felt a little dull. Solipsis shifted to third-person run-‘n-gun and picked up a new nickname: “Blam!” The planet became a Dyson Sphere – an artificial world built around a live sun – then a much cooler Dyson Ring inspired by Iain M. Banks’ Culture novels. Focus centered in on a beefed-up 3D build of a sketch by conceptual artist Shi Kai Wang, finally getting the thumbs-up with a drawing of an imposing cyborg soldier encased head to toe in pencil-gray armor.

The Master Chief set foot on Halo for the first time in 1998, and he was armed to the teeth.

Machetes, flamethrowers, mini-guns, a gravity weapon, SMGs, bazookas, pistols, rifles, and harpoon guns to deal with the odd sea monster (never built), plus a host of alien ordinance, all found its way to the ring, itself featuring a missing segment connected by scaffolding. Helicopters hovered overhead. Zodiac boats were on the beach. Local dinosaurs and rubber chicken-looking “blind wolves” could be subdued and used for cheap transport like a less-than-epic World of Warcraft mount.

Many became preludes. Most were simply cut by the time Jones shared the stage with Apple CEO Steve Jobs at MacWorld ’99 for Halo’s public debut. The crowd went crazy for it. Jobs announced Halo would release for Mac and PC same-day.

Reps from Microsoft saw the presentation as well. Microsoft was secretly developing its first gaming system since collaborating on the Dreamcast and headhunting top-notch content to launch it. Midway surfaced as a likely acquisition, but in June of 2000, less than three months after confirming “the Xbox project” to the press, Microsoft cut a check for $50 million and Bungie cashed it. Take-Two disengaged, taking the rights to Myth and Oni with them. MacAddicts everywhere howled in betrayal. Bungie was now a wholly-owned subsidiary of Microsoft.

Halo wasn’t just another videogame anymore. It was an exclusive launch title — THE launch title — for the Xbox, and the success of Microsoft’s big black box depended on it.