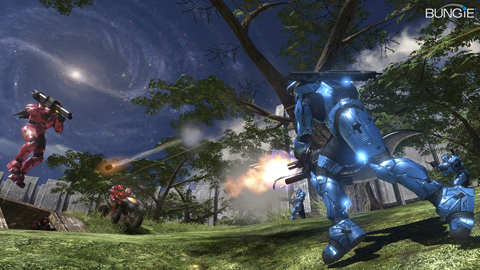 With the launch of Halo 3 only days away, Bungie has released one more VidDoc. This one, titled “Cinema Paradiso”, focuses on oft-discussed features Forge and Saved Films. This is the third of the VidDocs released so far. The first one, “Et Tu Brute“, focused on the development of the Brute characters, while the second one, “Is Quisnam Protero Damno“, focused on the development of multiplayer.

In addition to releasing this new video, Bungie also updated their site with information on films:

Saved Films: How to Use Them

Saved Films is a cool new feature implemented in Halo 3. Now, we didn’t invent it. Replays of games are as old as the hills, and PC players have been used to “demo modes” for trillions of Eons. All we did was add a coat of spitshine, make it work on a console and give the player some very nice, almost entertaining control over the feature.

Basically, it’s a recording of your movements and actions which can then be replayed in the game engine, precisely as it happened first time around. However, since it’s game data in a 3D graphics engine, we are able to give the player near-full control of the camera and VCR-like controls. Other features beyond pause, fast forward and so on, include the ability to make short clips and take high resolution screenshots from your films. The films will play back at whatever resolution your system supports – from 480i to 1080p – complete with 5.1 audio, even in stills.

Is a Saved Film the same as a WMV or QuickTime?

No. Saved Films are simply game data. The advantage of course is their size. A ten minute 1080p film would be hundreds of megabytes. But a Halo 3 saved film which will play back at that resolution, is just a few Megabytes. This makes them simple and quick to transfer and share.

What do I need to make a Saved Film?

How do I make a Saved Film?

Simply play a game. Multiplayer, Campaign, or even Forge. A selection of your most recent films will appear in the Theater Lobby, accessed from the main menu,

How do I control a Saved Film?

The controls for Saved Films are located in your manual – you can see an electronic version of the manual here and here. Controls are roughly correspondent to the movement controls of Halo 3, or the controls for the Monitor mode and Forge. You have full range of 3D motion and the ability to freeze time, fast forward, slow mo and more. The right trigger controls the forward speed of the film in an analog fashion – slightly depress the RT to slo-mo, press it all the way down to Fast Forward. In Multiplayer, you can skip back a “chapter” by pressing left on the d-pad. You can hide layers of UI by continually pressing the “B” button and “Y” detaches the camera from its default “follow” mode.

To follow a different player, push up on the D-pad and cycle through co-op or multiplayer players. To get back into first person mode, click down on the right stick as if your were zooming a weapon.

How do I take a Screenshot?

Screenshots are a great feature in Saved Films. To take a screenshot, press “X” to pull up the on-screen control menu. Use the D-pad to tab to the Screenshot button (a small camera icon) and press “A” to take a shot when you have your camera angle just the way you like it. The shot is anti-aliased, the resolution increases and it is saved automatically to your HDD. Screenshots you take can be viewed at www.bungie.net if you have linked your Gamertag and are a paid Live Gold member. You can see the screenshots of other players in their File Share, by searching for their linked Gamertag on www.bungie.net or by selecting them from your Friends list while playing Halo 3.

If you think you’d like to keep a Saved Film, access it from your recent Saved Films stack in the Theater Lobby. Select the film you’d like to keep and press X. It is instantly Saved and will not simply vanish when you cycle through your film limit (which is either 25 films, or about 400MB worth, whichever comes first). To rename a film, go to the Theater Lobby, choose the type of film it is (Campaign, Multiplayer etc) and select it from the list. You should now be able to press X to edit the name and description.

The simplest method would be to use a video capture card and appropriate software to turn the Saved Film into video data. At this time there is no software capable of doing this without video capture hardware. Machinima makers and amateur videographers already know lots of tricks and methods for doing this.

You can recommend your Saved Films to anyone on your Friends list. Simply select them from the Guide while Halo 3 is running on your 360. You will now have the option to recommend a file to them, or see their publicly facing files in their File Share. If they decide to watch your Saved Film, a “bookmark” will take them to the film, where they can choose to download to their 360 immediately. If you receive a Saved Film, you can control it just like you made it yourself – however, a Clip will pay back with the camera moves used during the recording of the clip. It is still possible to detach the camera with the “Y” button, however and watch from your chosen angle.

Films may also be watched over Live in a party, with up to 4 friends watching simultaneously – however, because of the enormous amount of data and bandwidth required, this feature is best enjoyed with very fast connections – otherwise it is possible that the Films could simply run out of bandwidth, gently depositing you back in the Theater lobby. The Host of a Saved Film watched in network viewing mode is the only one who can control “time” (pausing , FFWD etc) but other viewers may control their own camera movements throughout

Why can’t I go backwards in a Campaign Saved Film?

Because Campaign mode loads in a linear fashion – to skip back, you’d have to reload a previously played area. Which would take ages, suck and ruin the experience of watching the film in the first place. It also has to do with multiple checkpoints and the pseudo-determinism used in Combat Dialog, but we won’t frighten or bore you with that. In Multiplayer, the entire map is in memory, hence the ability to go back as well as forward.

Why can’t I make a clip in Campaign Saved Films?

The honest truth is that the feature did not function perfectly, and we didn’t want to ship something clunky. The fact that clips are infinitely more useful in Multiplayer anyway, made that decision much, much easier.

Where can I find cool Saved Films?

The Bungie community is going to create some epic films and clips. Browse the File Shares of your friends (and strangers) at www.bungie.net – read the comments and rankings of these films, and select ones you’re interested in. If you flag such a film, it will be downloaded to your 360 next time you log into Xbox Live in Halo 3.

What kind of films can I make?