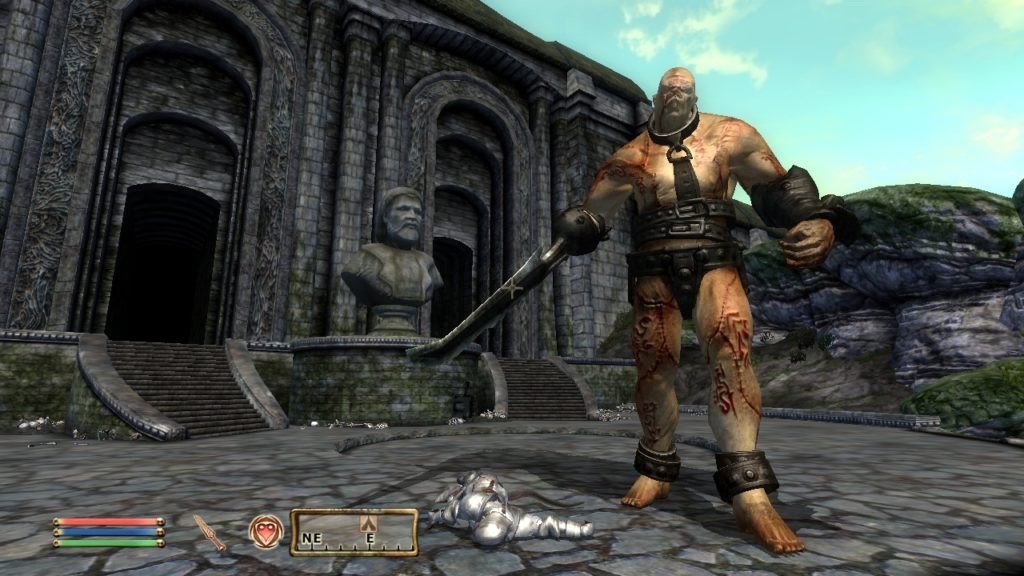 After The Elder Scrolls IV: Oblivion’s release last year, Bethesda Softworks has been slowly releasing little nuggets of new content via Xbox Live Marketplace. Most of this content, while cheap, didn’t add much to the game. Unlike the previous downloads, the Shivering Isles is an expansion pack filled with content, adding roughly 20-40 hours of new gameplay for those still running around Cyrodiil.

The expansion begins when you hear news about a strange island that has sprouted up in the middle of Niben Bay. Upon inspecting the island, you are greeted by a soldier standing guard outside of a strange doorway. Apparently everyone that has entered the portal has either come back out insane, or has simply not come back at all. Being the brave adventurer you are, you enter to find that you have arrived at the Shivering Isles, the realm of Sheogorath, the Daedric Prince of Madness. He has put a call out for a champion to help him stop the Greymarch; a sort of cleaning that happens at the end of every era.

The world of the Shivering Isles is divided into two regions: Mania to the Northeast and Dementia to the Southwest. Both areas are visually stunning and look absolutely nothing like anything that you have seen in Cyrodiil. Mania is very bright, vibrant, and oversaturated with plants like tall trees and large colorful mushrooms. On the other hand, Dementia is a very dark, foggy, and washed out swampland. The main city, New Sheoth, is also divided into two sections called Bliss and Crucible. The entire size of the Isles is about a quarter of the size of Cyrodiil, and is packed with tons of stuff to explore.

The main quest is pretty epic in scope and is easily on par with the one in the main game. The quests, of which many are memorable, will take you all over the Shivering Isles to complete various tasks. Your first job upon entering the realm of Sheogorath is to defeat the Gatekeeper. He is an extremely large and powerful enemy that is guarding the Gates of Madness, which is the only exit from the Fringe (a holding area of sorts that prevents those unworthy from entering the actual Isles). You can face him as is, but innovative players will find ways to tip the battle in their favor.

Another one of the early quests involves you reactivating Xedilian, which is an old dungeon that was used to deal with unwanted adventurers before the Gatekeeper was created. Once activated, the dungeon magically draws any visitors to it, at which point you can either kill or play tricks on the NPCs that find their way into its chambers.

Besides the main quest, the game offers a lot of interesting side quests, many of which are just as crazy as the people who reside in the Isles. One of the citizens of Bliss will explain to you that while he has perfected getting boats to float on the water, he has had less success in forcing the water to fly through air. Logically, a boat carried by flying water becomes a Skyboat. So he tasks you with searching everywhere for calipers and tongs to achieve the effect of keeping water airborne, and pays you gold for each caliper or tong you bring him. Another resident is afraid to sleep inside because he believes the walls will fall on top of him. So he asks you to find a safe place for him to sleep outside.

In addition to the new quests, the expansion also includes new weapons and armor, some of which you can craft from raw materials found in various dungeons throughout the Shivering Isles. Players will also get some new spells along the way, the most interesting of which are a few summons. Also, those who like to create their own potions will find a huge amount of new ingredients to experiment with.

Overall, the Shivering Isles is pretty good. It features all of the stuff that you would expect from an expansion pack: an interesting plot, a good amount of quests, new weapons, armor, ect. Not to mention that this expansion offers more hours of gameplay then other full priced retail games, making the Shivering Isles a convincing reason to revisit an already excellent game.