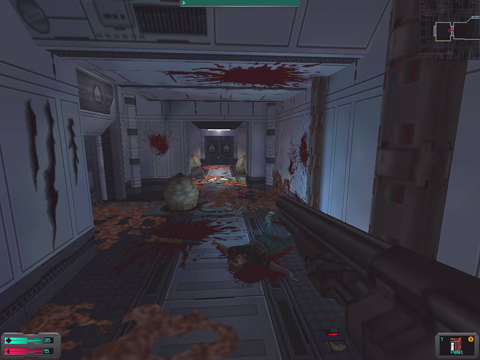 Bioshock is easily one of the most anticipated games coming out later this year. With all of the media released on the game so far, I think it is pretty safe to assume that most of you know what sets this game apart from all of the other shooters. Unique gameplay elements such as modifying weapons, different ammo types, hacking, plasmids and adam all promise to elevate the first person shooter genre to new heights. However, many gamers are probably unaware that all of this has already been done before. Irrational Games’ previous game titled “System Shock 2″ did a lot of what people today are calling revolutionary all the way back in 1999. Granted Bioshock is taking a lot of these same gameplay elements to a whole different level (such as with more interactivity with the environment) but a lot of the same core gameplay ideas are still there.

So I thought it might be fun to take a look back on System Shock 2 and see how some of the gameplay systems found in Bioshock were present in System Shock 2 eight years ago.

Plasmids/Cybernetic Modules & Money/Nanites:
In Bioshock, players can use Adam to purchase to purchase plasmids (abilities) for their player such as Electro Bolt or Winter Blast. To have “energy” for these abilities, you use Eve.

This works pretty much the same way in System Shock 2. Players can spend Cybernetic Modules on psionic abilities which are essentially Plasmids (however, the number of psionic abilities in SS2 is much greater then the number of Plasmids in Bioshock). Aside from psionics, System Shock allowed the players to also use Cybernetic Modules to upgrade other aspects of their character (such as strength, hacking, modifying, ect).

In Bioshock the player can use money to purchase items from vending machines such as health and ammo. The same is true for System Shock 2, except money is replaced with nanites.

Hacking:
Both System Shock 2 and Bioshock have hacking, which takes the form of a mini-game. Just as in Bioshock, players in System Shock 2 can hack security systems (such as cameras and turrets) to turn them on to their side. Bioshock has taken this feature forward by adding security bots that you can hack that will then protect you.

Ammo Types:
Both games have special ammo types that are good against different types of targets. For example, System Shock 2 has standard bullets, armor piercing rounds, anti-personnel rounds as well as many types of grenades, slugs, ect.

Weapon Customization:
In Bioshock, you can upgrade your weapons for effects like increased magazine size, faster firing rate, ect. The same is true for System Shock 2. Although System Shock 2 goes a bit further allowing multiple firing modes. Unlike Bioshock, the weapons in System Shock 2 degrade over time, requiring disposable maintenance tools to keep them in working order.

Audio Logs:
The story in both System Shock 2 and Bioshock is told primarily though audio logs found lying around the environment.

So there you go. If you are having trouble waiting for Bioshock to come out, you might want to try to get a copy of System Shock 2. Even by today’s standards it is a great game.