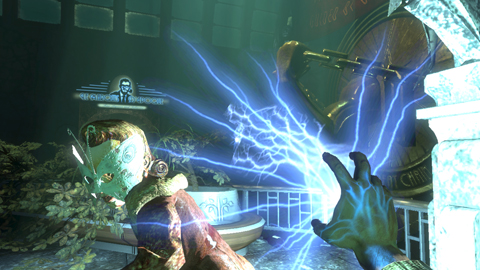 At this point, I truly expect Bioshock to win Game of the Year from at least a few publications even though I have yet to play it. Every single preview I read is nothing but praise, which just makes the wait even harder. Hopefully this game will sell extremely well and make up for all of the copies that System Shock 2 should have sold.

The biggest controversy during our post-show discussions erupted while deciding our game of the show. Our two contenders were Fallout 3, which emerged from this year’s show covered in post-apocalyptic glory, and Irrational’s soon-to-be-released BioShock, the spiritual sequel to System Shock 2 that wowed us at last year’s show. The heated “discussion” nearly resulted in a monkey-knife-fight between two editors and loud screaming from the rest. The fact that this was happening in a steak house in Culver City filled with families and now-traumatized children just out for a good time should attest to the depth of our passion on this issue. When the smoke cleared, however, it was BioShock that emerged victorious. We rounded up some of our editors to talk about what most impressed them in the game.

Allen ‘Delsyn’ Rausch, Associate PC Editor: One of the most tired debates in the gaming world is whether or not a videogame can be considered “art.” While I won’t presume to give a final answer on the topic, I will say that certain titles such as Planescape: Torment, Ico, Grim Fandango and System Shock 2 answer that question for me. Assuming the rest of BioShock holds up to the quality of the sections we’ve seen so far, then I’d say this game has every chance of joining that pantheon. It’s very rare for a game to truly transport you to another world but during the first 20 minutes of BioShock I had as much fun reading the ads on the walls and drinking in the luscious Art Deco design as I did fighting against the mutated citizens of Rapture. This is a game where the setting itself tells the story and it’s one I’m eager to explore more of.

Joynt: I don’t get shell-shocked by games very often, but BioShock, after a few hours of getting to actually play, has me blown away. From the game’s visual beauty to its subtle storytelling to its dedication to being a shooter but not being shoehorned into that genre’s weaknesses, this is a game that is ready to raise the bar on so many levels that I feel like it really has no competition at the moment. Its only potential downfall is if it can’t maintain the combination of artistry and visceral appeal over the course of the entire game, but I honestly don’t think that will be the case. Based on the pedigree that Ken Levine and his team bring to the project and the quality of the gameplay I’ve experienced, this just isn’t a game that I see stumbling.

The gameplay itself is so rich, with so many choices even in the very first and most linear level, that I see BioShock offering a lot of replayability. More importantly, the depth of the universe that has been built here is almost unbelievable. Details like where an underwater city would get its air isn’t forgotten; it’s been planned out and incorporated into the game as a mission, telling a story without clubbing you over the head with it. Although I love my long cut scenes, there’s no question now that BioShock tells a story with every frame. It’s going to be a long wait until August.

Sterling: Thank heavens for little girls. Otherwise, I wouldn’t have lots of Adam to take on the army of howlingly desperate Splicers running amok in Rapture. The best thing I can say about BioShock is that it’s a very difficult game to explain in a few sentences or less. “You’re battling in a submarine Randian dystopia filled with paranoid mutants. Along the way, you’ll need to make mutagenic upgrades to yourself in order to survive. The best, and fastest way to those upgrades is by finding mutated eight year-old girls…” Hey, come back!

While I would’ve had few objections to either this game or Fallout 3 winning best of show, I’m a bit satisfied deep down that more people got the chance to see BioShock this year than last year, when it narrowly beat Gears of War. While multiplayer is always strongly considered in our evaluation processes, sometimes you get a title that’s indisputably great, single-player or multiplayer. This is one of those games.

Sluggo: Having already played through the opening levels of the game at a previous event on the Xbox 360, I was excited to finally check out the PC version at E3, which was conveniently sitting in the Microsoft games lounge where a ton of games like BioShock, Crysis and Gears of War PC were almost perpetually available to sit down and play. I was glad to see the PC version looks every bit as impressive as the 360 game — maybe more so. As the others have mentioned, the art design is so unique that fighting the strange denizens of Rapture almost becomes secondary to soaking up the atmosphere and figuring out exactly what went wrong in this would-be utopia.

Maybe the best thing about BioShock is its upcoming August release — rather than competing for our gaming time with 20 other amazing titles coming this holiday, we’ll have a few weeks to soak it all in. August 21 can’t arrive soon enough.

Warrior: Entering Rapture again after a year away was even eerier than the first time. Irrational has done a tremendous job of capturing the artistic feel of a utopia gone bad, from a dark brooding setting to enemies with insane personalities. The eeriness is reminiscent of System Shock and the calm, malevolent voice of Shodan following you everywhere. The echoes and other sound effects create an ambiance that nightmares are made of, and playing the game will have you jumping out of your seat. Add in the stylized gameplay elements of special powers and abilities to complement the traditional use of firepower and Irrational has created a game where goals can be accomplished in myriad ways. The same can be said for dispatching enemies.

No matter how you slice it, BioShock is deserving of the best game of this year’s E3. I can’t wait to get my hands on the final game in five weeks, after which you can bet that I’ll be a rare sight in daylight.