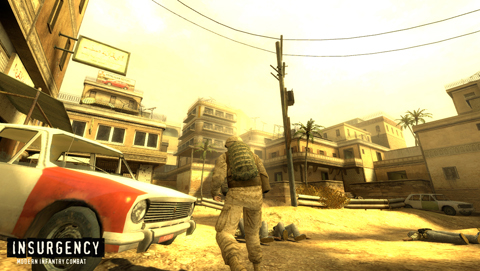 The Insurgency team recently announced that they are extremely close (June ‘07) to releasing the game. From what I have seen, the game looks extremely impressive. Everything from the level design to weapon and player models are pretty high quality. Also, the gameplay in the trailer looks pretty fun. Could this be the next Counter-Strike or Day of Defeat? It just might be, and I absolutely can’t wait to try it out.

Insurgency is a total conversion modification using Valve Software’s Source Engine. Insurgency immerses you, as the player, into an intense and realistic online combat experience.

Set on the modern battlefields, Insurgency simulates modern infantry combat that doesn’t just encourage the use of teamwork and tactics, but makes it a requirement of survival. On the streets of Iraq it is not safe to be alone. Go head to head with guerrillas, insurgents and resistance fighters, simulating the extreme conditions faced on today’s battlefields.

Engage in urban warfare where every window, doorway or road block is a potential ambush point and every object on the street needs to be watched with care. Fight against the occupation from behind windows and burned cars, with your finger on the trigger and an unsuspecting patrol down the street getting ever closer. Whatever you choose to do, Insurgency is sure to get your pulse racing and make your breathing feel heavy while you engage in such a unique and original combat experience.