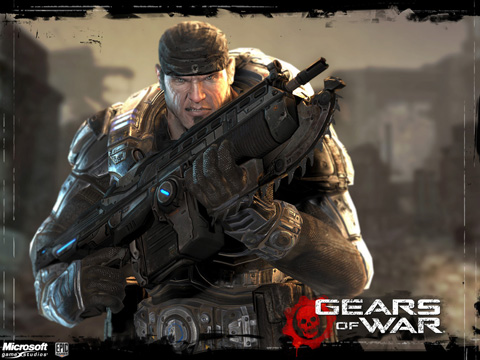 The new maps have been out for a few days now, and I feel that I have played them enough to write up a small review. There are a total of four new maps, each of which is very well done. Graphically, they are all extremely impressive. They are all also pretty well designed, with only Bullet Marsh feeling a bit lackluster. Each of the maps are set in unique settings, which helps make them feel fresh instead of blending in with the previous ones. Overall, these are very polished maps, and well worth the $10 for Gears of War fans. Here is a quick description of each of the new maps:

Garden: Garden is one of the more open maps in the new map pack. It is medium sized with about 1/3 of the map indoors, providing cover from the hammer of dawn, while the rest of the map is outside, with a good amount of cover. While the map is large, big sections of pipe on one side limit your ability to flank the enemy in certain situations. The main power weapon on the map, besides the Hammer of Dawn, is the Boomshot, which is located to the side of the map. There are two sniper rifles located almost immediately in front of the team spawn points, but in order to enter the small greenhouse that holds the weapon, three buttons that are located further towards the center of the map must be pressed to turn off the pesticide gas. The gas will stay turned off for a while, but it eventually turns back on. Overall, the map feels pretty balanced and is a lot of fun to play.

Subway: Subway is the smallest and quickest playing of the new maps. It is also one of the simplest to learn. There are essentially two areas of the map. First there is the street level area. The street has a good amount of cover scattered around in the form of cars and barriers. Two weapons, a Sniper Rifle and some grenades, can be found on the streets as well. Located at the spawn points and in the center of the street are entrances to the underground subway station. Below ground there are two sets of train tracks, some subway cars (one of which has a Torque Bow inside), and a Boomshot with grenades in the center lobby of the station. The Boomshot is clearly the most powerful weapon in the level considering the small size, but you have to be careful grabbing it. The Sniper Rifle spawn located above has a window next to it that overlooks the Boomshot. Combat on this map is quick and intense, and you must rely heavily on teamwork and pure skill.

Process: Process takes place in a massive subterranean Imulsion processing plant. It is easily the largest map of the bunch, and features three powerful weapons: the Torque Bow, Boomshot, and Sniper Rifle. The level has a very industrial feel, with lots of pipes and active machinery running. These big pieces of equipment provide adequate cover from your enemies, and the large map size provides lots of opportunities to flank your opponents. The map feels pretty balanced, although I personally feel that the Boomshot’s current spawn location (on a raised platform towards the center of the map overlooking the Torque Bow and much of the plant floor) makes the weapon too powerful as it is easy to locate and take out enemies almost as soon as you pick it up. This makes the weapon extremely powerful, and often leads to a mad rush to grab it. It would probably be more balanced if its spawn point was swapped with the Sniper Rifle. But despite that one minor issue, the map is still very well designed and lots of fun to play.

Bullet Marsh: Bullet Marsh takes place in a Kryll-infested swamp in the middle of the night. The heavy rain and the limited lighting reduces visibility and gives this map a much slower pace compared to the rest of the maps. There are really only two paths to take through the map. The high path takes you across a bridge over the water. On both sides of the bridge are sniper rifles, and a Boomshot can be found in the center structure on the bridge. Smoke grenades are extremely effective here, and are really the only safe way to move across. The low path takes you through the flooded marsh and under the middle bridge. The path wraps around the middle structure, goes under the opposite side of the bridge, and connects with the enemy spawn point. Along the way, a torque bow is positioned on a lighted platform in the middle of the water. However, enemies can shoot out a generator located next to it to temporarily turn out the lights, allowing the Kryll to attack anyone in the dark. However, getting attacked by the Kryll will only down you, and the lights will eventually turn back on.

The two paths severely limit your options to flank the enemy and those that choose the water path are and a pretty significant disadvantage when fighting those up on higher ground. The limited flanking options, two sniper rifles and low lighting can, at times, slow the gameplay down to a pretty boring level. It is not too uncommon to have teams hide on their side of the bridge with sniper rifles while the timer counts down to a draw. Or for an outnumbered enemy to simply hide until the time limit is reached, forcing a tie. Some people might like the slower pace, but I personally don’t find it as fun as the other maps. Overall, while Bullet Marsh the most visually impressive map in the pack, it is probably the weakest as far as gameplay goes.