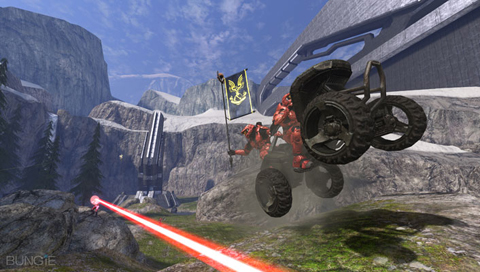 The Halo 3 Multiplayer Beta will go live on May 16th at 12:00 AM PDT and run through June 6 th at 11:59 PM PDT. That means that folks who purchased specially marked copies of Crackdown, or won a spot in the Beta through the “Rule of Three” or other regional promotions, will be able to log into their Xbox Live Gold accounts, download and play the Halo 3 Multiplayer Beta and enjoy an early peek at the multiplayer aspect of the game.

The Beta itself consists of three maps – Valhalla, High Ground and Snowbound – graphically improved since our first MP screenshots – and all three will be playable in Matchmaking only (that is after all, what we’re Beta testing here). All three maps are suitable for a wide variety of gameplay types, and you will have the chance to try all manner of game types, familiar and new.

There are a number of new features you’ll get to test out – including a new grenade type, a completely different class of weapon and some of the enhanced online functionality we plan to bring to the game – but it should be noted, a lot of secret features are hidden in this Beta. We’re keeping a lot of our powder dry for Fall. In May, when your firing the Spiker, sniping vehicles with the Spartan Laser and sticking fools with the Brute Spike grenade, remember that it’s just a peek-a-boo fraction of what’s to come.

There will also be new guns, vehicles and gameplay features to try – including the mysterious “X-Button” functionality. But you don’t have to wait to find out what that is, since you can now view part of its functionality in our latest Vidoc, “Is Quisnam Protero Damno!” a long look at the making of Halo 3’s Multiplayer game.

Here you’ll meet the Multiplayer team and watch a level get built from concept to completion. You’ll see the care and attention that goes into every aspect, and yes, you’ll see a level or two that nobody has ever seen before.

NOTE: All of the game footage in this doc was taken during the Alpha stage and isn’t even representative of what you’ll see in the Public Beta, let alone the final game. You will see frame rate skips, unfinished animation and graphical features that will change come Fall. All the footage is clearly marked Alpha.

And there’s a ton of stuff in the Vidoc you simply haven’t seen before (including the X-Button) – and it’s well worth watching. Now, there’s nothing like seeing it in 720p in Dolby Digital, so remember this Vidoc is also available today on Xbox Live Marketplace.