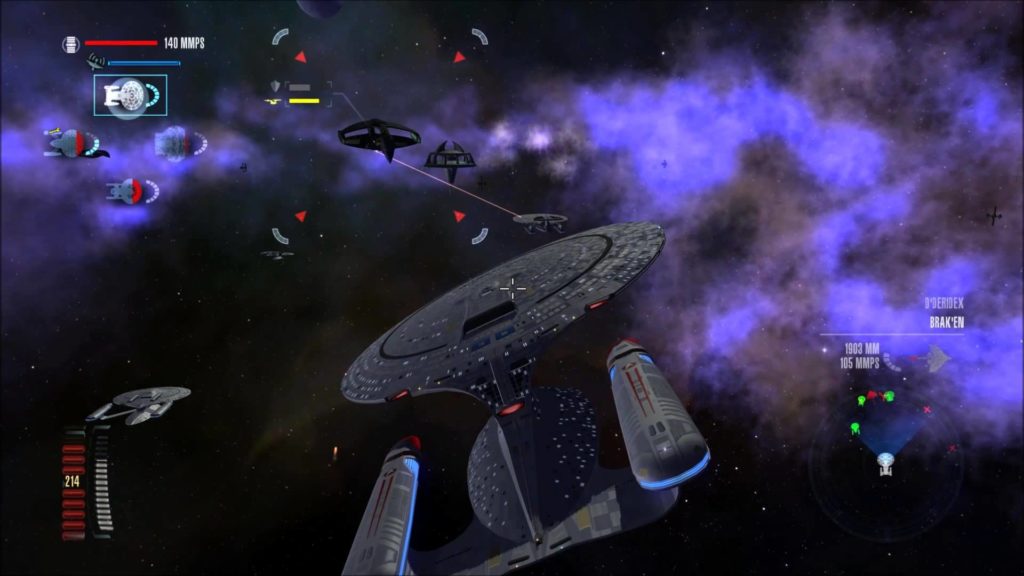 Star Trek fans have had some pretty funny luck when it comes to video games. For every good game like Starfleet Command or Elite Force there is an Star Trek: Encounters or Star Trek: Pinball. Luckily, Star Trek: Legacy is a pretty decent game, although it is clear that it had the potential to be a whole lot better. On paper, Legacy sounds like a great Star Trek game. Give the player control of lots of ships, cover every series, include the voices of every Starfleet captain, and tie it together with a storyline that would actually make a good Star Trek movie. And for the most part the game is pretty good.

You start the game off as Captain Archer in the NX-01 before moving on to the Enterprise, Defiant, and so on. The ships are modeled pretty accurately, and behave as you would expect. The combat offers a good amount of depth without getting absurdly complicated like the Starfleet Command games. The starship combat revolves around maneuvering your ships, either together as one task force or individually, into position to get your enemy into the firing arcs of your weapons, while trying to stay out of theirs.

Most ships have both phasers and torpedoes. Phasers are good against shields and they run off of energy which recharges after firing. The amount of damage they do increases over time, so allowing them to fully charge before firing again is a good tactic. Torpedoes are good against the hull of a ship and they do a constant amount of damage. However, you have a limited number of them, so you will want to make sure you have a good lock on the target before firing. The strength of your weapons lock depends on your position and distance from your target. And if you are able to get in close enough you have the option of targeting specific subsystems in the enemy ship such as weapons or engines.

You can also manage your speed. Besides going to warp, you can run at full, ½ or ¼ impulse. Slowing down allows you to turn faster, but also makes you an easier target to hit. In addition to changing speed, you also have control over your power systems. Rerouting power can give you a boost to the system (engines, shields, weapons) that you need the most at any specific moment. For example, you can take power from your shields and route it to weapons for faster recharge and longer range at the cost of defense. Lastly, you can issue repairs on certain ship systems, but repairing will drain energy, making your ship less effective in battle while the repairs are underway.

There are of course other tactics that you can take advantage of such as hiding ships in nebulas and beaming away teams to space stations once the shields are down to capture it, but these are more mission specific and you wont find yourself doing them very often.

As you complete each mission, you are given points that you can spend on buying new ships for your task force. You can have up to four ships directly under your control at one time. Ships fall into different classes such as cruisers and destroyers, and it’s up to you to decide how many ships you actually need and of what type. These points carry over from one mission to another, so it’s a good idea to try to save as many credits as you can or you may find yourself facing heavy opposition with not enough points to buy more powerful ships to even the odds.

The missions offer a pretty good variety of things to do. They are not all “go here and kill everything” missions that you might expect. While some will task you with doing just that, there are also missions where you will be evacuating people from poisoned planets, sneaking across enemy lines in a cloaked ship to conduct hit and run attacks, and defending Deep Space 9 from the Borg. The game is at its best when it throws you into these huge battles. Seeing these beautiful ships fill the screen and explode is pretty exciting.

However, the game also has some low points. This is mainly the result of your inability to save during the missions. So if you fail, you are stuck restarting the mission from the beginning. With some missions lasting nearly an hour, this is really unacceptable. At the very least the game should offer a mid-level checkpoint. Sometimes mission objectives are not completely clear, leaving you trying to figure out what it is that you are supposed to be doing. One mission where you save planets from falling interstellar debris proved especially annoying because of a rather narrow margin of error. Luckily this is the exception rather then the rule. I only had to restart one mission the entire time, although it did take three or four tries until I finally got it. But for the most part the mission design is fine.

The storyline is actually surprisingly good. It tells the story of a Vulcan scientist that discovers the remains of a Borg ship during the early days of the Federation, and figures out a way to become their queen. It’s a pretty good plot device that ties all of the eras together, that is if you can follow it. If you find yourself feeling like the story is missing something, that’s because it is. A few missions were cut, particularly from the end, of the game in order to get it out in time. You still get the gist of what is going on, but it’s not as clear as it could have been.

While the storyline is pretty cool, the way it is presented is not. Missions often open up with long winded narrative by one of the captains while the camera just circles around the ship. This is a pretty boring way to tell the story, and it’s surprising that they could not find a more interesting way to tell it. However, the voice acting is pretty good for the most part, and having all of the captains voice their lines makes these sequences bearable.

Online, the game doesn’t have much going for it. There are only two modes of play available. The first is a deathmatch game where you simply try to destroy your opponents either by yourself of in teams. The second is a co-op survival game where you and your teammates try to survive wave after wave of enemy ships. Both can be fun for a while, but it’s not something that will hold most people’s attention for more then a few games.

Overall, Star Trek: Legacy is a good game. The starship combat is fun and has a good amount of depth to it, while the missions offer enough variety to keep you playing for a while. There is also a good mix of achievements that give some incentive to go back and play certain missions over again. Although it is a little disappointing to think about how much better this game could have been if they spent a little more time on it and added a few more features like checkpoints and more multiplayer options. Let’s hope Mad Doc Software gets a shot at a squeal, and are given the time they need to make it amazing.