The latest version of Dystopia has been released. You can download it below:

Dystopia is a cyberpunk themed total conversion of Half Life 2, created by an amature development team and released to the public for free. 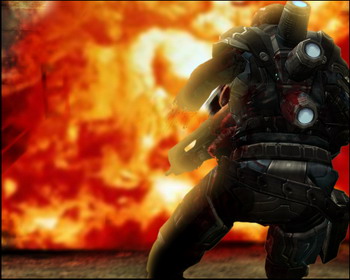 As either Punk Mercenaries or Corporate Security Forces the player will fight through the physical world to gain access, via jack-in terminals, to cyberspace.

Cyberspace is a three dimensional representation of the world’s network. Inside cyberspace players will launch programs to hack into systems linked to the physical world while fighting off enemy hackers and defending critical systems. Gameplay progresses through inter-linked physical and cyberspace objectives, some are completed in either the physical world or cyberspace, others only by a well timed combination of the two.

Whether the player is a heavily augmented combat mercenary armed to the teeth with the latest in firepower, or a twitch reflex cyberdecker racing to infiltrate a cyberspace node; they’ll be immersed in an action packed battle. Only through skillful use of the high tech arsenal we’re making available and intelligent team play will players truly jack-in and kick ass.

Team Dystopia is a collection of dedicated and talented gamers who are creating an action packed multiplayer game. Dystopia draws on the themes and concepts of the cyberpunk genre and implements ideas born out of years of gaming experience. With a diligently designed gameplay system, we hope to produce the next step in online multiplayer gaming.