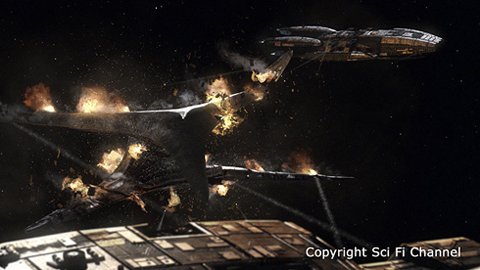 The game is being developed by Australian-based Auran Games and will feature intense space battles as you pilot ships for either the humans or Cylon forces. The game will also feature single player and multiplayer modes. According to Bill Kispert, vp interactive of NBC Universal, “We wanted to bring a more intense combat experience to gamers. From a story standpoint, fans will be able to relive key battles from the first two seasons of the show, and then we’ll add new content and missions outside of that.” The game will be played from a first person perspective, putting you in the cockpit of Vipers and Cylon raiders.

Expect the game to arrive on your console this fall. Now if only we could get Battlestar Galactica Episodes on the Video Marketplace. If you have never watched BSG before then you are missing out on one of the best shows on television. Check out this clip from when the Battlestar Galactica attempts to rescue people from the surface of the Cylon occupied planet New Caprica. It is possibly one of the best science fiction battles ever: