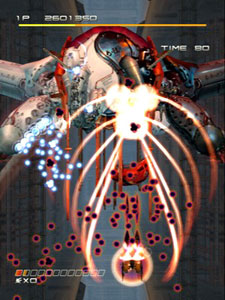 Well it looks like my prayers have been answered and Ikaruga is headed to Xbox Live Arcade. According to CVG, an early build of the game has been spotted on the debug version of Xbox Live, which is only available through Xbox 360 development consoles.

If you have never played Ikaruga before, all you need to know is that it is the absolute best Top-Down Shooter ever created. The game is based on a two-color system, allowing the player to switch between the black & white sides of his ship during gameplay. The black side is immune to black enemy bullets, and dies on impact with white enemy bullets. Your own black bullets do double damage to white enemies. The opposite is true for the white side. These properties create a balance between protecting yourself well and killing enemies fast.

Ikaruga could easily offer the best co-op experience over Xbox Live for an arcade game. Let’s cross our fingers and hope that it is included.