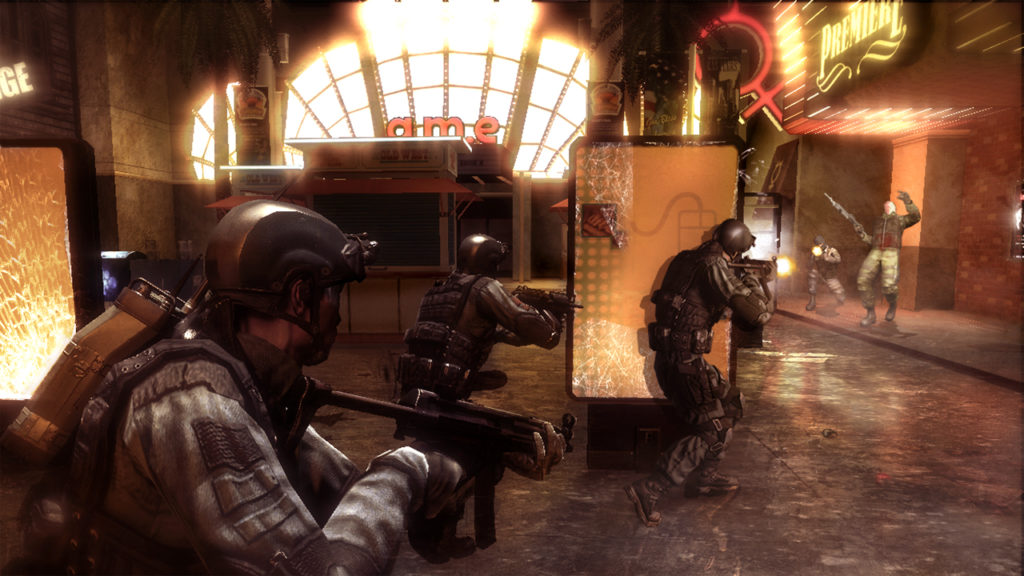 Tom Clancy’s Rainbow Six series of games have seen a whole lot of change over the years. The series started out as a slow, tactical, shooter with a heavy emphasis on planning. When the series made its jump to the Xbox with Rainbow Six 3, the game dropped the planning stage to attempt to appeal to a broader audience, while still retaining a tactical shooter feel. The game was extremely successful, becoming one of the most played games on Xbox Live. But after a well received expansion, the developers took a sharp turn and moved the franchise into arcade shooter territory. The majority of the fans were disappointed, and the game was a critical failure. But don’t worry Rainbow fans, Ubisoft has indeed learned from their mistakes. Vegas is the most intense and tactical Rainbow Six game, making it easily the best in the series.

Rainbow Six: Vegas takes place in Las Vegas as you probably have guessed. Most of the story unfolds while you are playing the game, either in helicopter briefings while you are flying to your next target or while you are on foot from an audio and video feed in the top left of your screen. This is a pretty nice change from the text briefings before missions that Rainbow Six players are used to. Without giving too much of the plot away, terrorists have attacked various casinos in the city, taking some hostages and planting bombs. You play as Logan Keller, a team leader for a group of highly skilled soldiers, and it is your job to go from casino to casino and take care of business. If this all sounds familiar, that’s because it is. We have all heard this same basic story dozens of times in other games and Hollywood action movies. But while the storyline isn’t exactly original, it is good enough to keep you at least mildly interested. What really matters is the gameplay, and that is where the game truly shines.

If you have ever played Gears of War, your might be surprised how similar the two games play. They were in development around the same time, so it’s hard to say if any copying was going on, but both games have a heavy emphasis on cover, requiring you to use anything you can hind behind to stay alive. However, the cover system in Vegas works quite a bit better then it does in Gears. You have a lot more control when it comes to moving around cover and shooting out. Also, the cover seems more important in Vegas then it did in Gears, mostly because you can take much fewer shots in Vegas before going down.

Another element both games have in common is a squad of teammates that you fight along with. Controlling the team works similar to other games in the series. You can still tell your squad where to move, whether to hold fire or shoot on sight, to stack up behind doors before throwing in a grenade and storming in as well as all of the other commands you could give in the previous games. However, there are a few additions. For example, you now have a snake cam that allows you to peak under doors. Using this device, you can then give your team priority targets in the next room, to make sure they take down the most important enemies first when they enter. Your teammates also have some pretty good AI. They know how to take cover and engage enemies, meaning you really don’t have to worry about them that much. They also do a great job taking down terrorists, making them very useful.

Besides commanding your squad, the game has other features that allow for some complex tactics. Many of the rooms have multiple entry points. Using the snake cam you can scout out the room before determining how you want to enter it. You can even use two entrances at once, by having your team stack up outside one door while you go to another. Then you can order your squad to barge in guns blazing at the same time you enter from another door. You also have the option to do some repelling during some points of the game, which adds another entrance, the windows, to a room.

Your large selection of weapons also allows you to take in some tactical considerations. Vegas features a ton of assault rifles, machine guns, shotguns, and pretty much any type of gun you can think of. Each of the weapons offers some level of customization. Pistols can have things like extended magazines or laser sights, while rifles can be fitted with different types of scopes depending on what is needed. Once you have selected your guns, you can choose from items like explosive grenades, C4, breaching charges, flash grenades, and more.

With the cover system, team controls, multiple entry points, and a large selection of weapons, Rainbow Six: Vegas offers a lot of choice when it comes to tactics.

But the single player campaign is only half of what the game has to offer. Rainbow Six: Vegas has a fully featured and expansive multiplayer option, which easily makes it the best on-line shooter on the Xbox 360. The core of the multiplayer experience is what the developers call the P.E.C., or “Persistent Elite Creation”. When you first start out, you create your own character and have a limited access to different types of gear like body armor and weapons. After every match, your character gains experience, allowing you to go up in rank and gain access to more items. It’s a neat feature that rewards you for playing, yet doesn’t make the game feel unfair for new players that don’t have access to all of the items. Different armor makes you choose between mobility and protection, while other weapons may be more powerful but are harder to control.

There is a good selection of game modes to choose from that range from objective driven modes like attack and defend, to more standard offerings like solo and team deathmatch. The levels are varied and well designed for the most part. Though some, such as the Calypso Casino level, were clearly designed with attack and defend in mind and can be slightly unbalanced in other game modes like team deathmatch due to one team having a better spawn point. But if you are not into competitive gaming against other players, Vegas offers cooperative gameplay over live for the entire single player campaign with up to three other players. Or you can play “terrorist hunt” which is a mode that puts you and your friends in a level with a bunch of randomly placed terrorists that you need to take out.

Overall, Rainbow Six Vegas is a great game with a lot of value. The single player is challenging and offers a lot of depth, and the multiplayer packs in a lot of features. You could easily find yourself playing this game until the next Rainbow Six game comes out. It is not often that developers try to reinvent such a successful series, but Ubisoft gave it another shot and ended up creating the best Rainbow Six game so far.