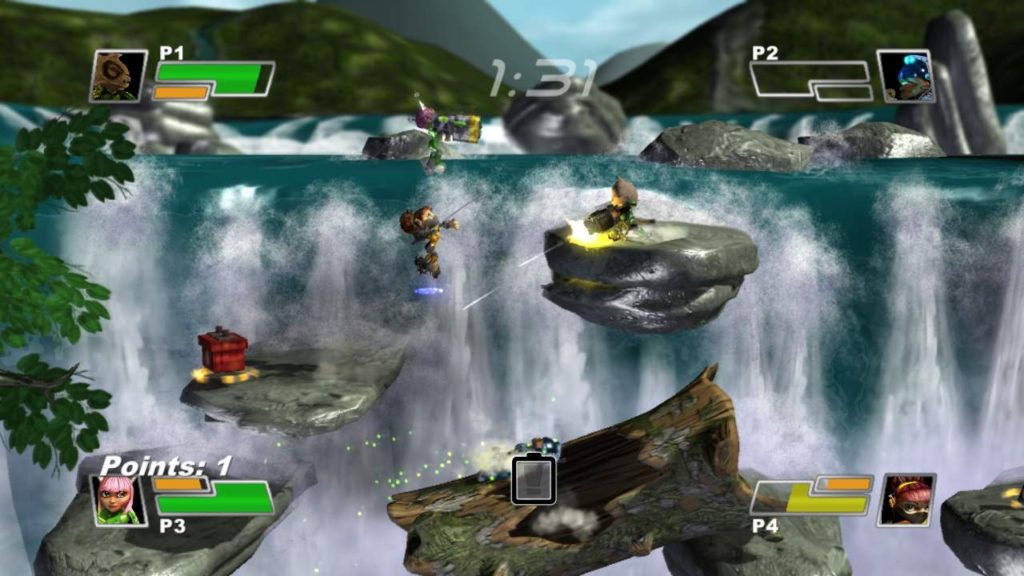 Small Arms is a four-player fighting game in the style of Super Smash Brothers. But here the game puts a much heavier emphasis on using guns to take down your opponents. The combat is pretty action packed and fast, but it’s not exactly complex either. While it does play pretty similar to Smash Bros, the overall experience is not as deep.

The single player campaign takes you through a series of battles against AI controlled characters. These fights get increasingly harder as you go along and sometimes they throw multiple opponents against you at once. Once you reach the last level, you will fight against a boss that is actually pretty simple to defeat but is still pretty cool nonetheless. The game also features a challenge mode that is best described as a survival game where you fight enemy after enemy until you finally die. Lastly, the game also has an extra shooting range game where you have to shoot at paper targets as they go across the screen to get bonus points. While the single player gametypes are interesting enough to warrant playing and do give you good practice, the Xbox Live play is where the real action is.

The weapons in the game are much more interesting then the characters, which is great since they are the main focus of the game. All of the weapons have two different firing modes. For example, the freeze gun can shoot either ice shards or freeze enemies in one blast of ice and the sniper rifle can shoot normal bullets or it can drop mines at your feet. Overall, there is a pretty good selection of weapons, and they all behave pretty differently from each other. This means that you will probably have one or two favorite weapons, but all of the weapons are pretty useful. You can shoot the guns in any direction by aiming with the right analogue stick. This adds a good amount skill to the game, requiring you to be able to aim all while jumping around and dodging enemy fire. In fact, the game can be pretty difficult until you get used to how the characters control and how to aim their weapons. But once you do, the controls feel pretty natural.

All of the weapons run on energy that you deplete when you shoot. The good news is that ammo (in the form of batteries) as well as new weapons spawn into the arena pretty often. This makes watching and controlling the spawns a pretty important. Knowing when you are low on ammo and making a run for a newly dropped weapon or ammo before other players can get it is an important part of the game.

When you do manage to run out of ammo, it is possible to get in close do some damage. But while there is a decent amount of depth in the weapons, there is little depth in the melee system. The only attack available for you to use is punching. It would have been nice to be able to string together punching and kicking combos or something like that. But since all you can do is punch, your best bet when going up against an armed opponent is to run away by making good use of the dash button to grab a new weapon or some more ammo.

The levels (along with the weapons) are the highlight of the game. All of the levels are designed pretty well for four players. There isn’t a single level in the game that falls flat. One of the more interesting levels takes place inside a tornado while you jump from one piece of flying debris to another. Another level has you jumping from car to car on a speeding train. The levels a pretty impressive graphically considering this is an Xbox Live Arcade game. The weapon effects and furry characters also look pretty good.

Overall, Small Arms can be pretty fun, but it lacks the personality and depth that Smash Bros. has. But then again, Smash Bros. is a full retail game while Small Arms sells for just $10. Considering that it has some pretty fun online gameplay as well as some interesting weapons and levels, Small Arms is a worthy Xbox Live Arcade purchase.