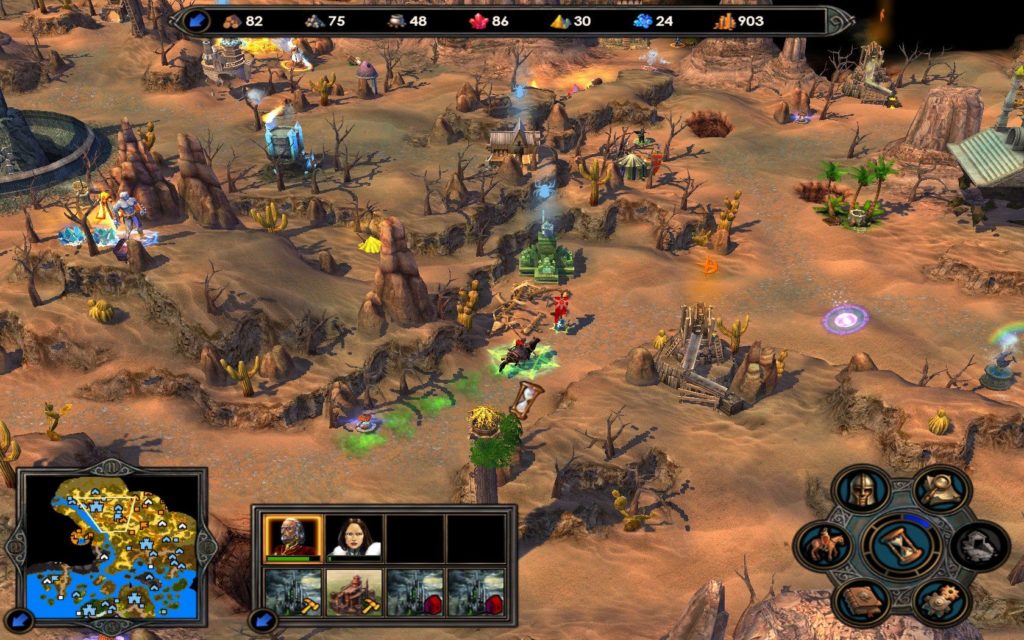 If you have played either Heroes II or III, then you should know exactly what you are getting into in this game since it shares a lot in common with both of those. You start off most games with one hero and a low level castle. From there you must build up your armies to crush your enemies. But to do that you must go exploring, fight enemies, and build up your castle. The amount you can move is based on a daily allowance. Once you have moved all you can, you must end your turn. This moves the game ahead one day, allowing you to rest and giving the other players a chance to make their moves.

The maps are filled with resource to collect, artifacts to find, enemies to defeat, dungeons to explore, towns to capture, and much more. Capturing mines will put them under your control, giving you a set amount of that particular resource per day. But many of the resources on the map are guarded by neutral creatures, so you will have to fight to control them.

Battles take place on a grid with one army on the left and another on the right. Both sides take turns moving their creatures. A unit with a number on it represents a “stack” of that many creatures and will behave as a single unit. The amount each unit can move depends on its initiative, with faster units attacking first. The amount of damage they do depends on the creature’s stats as well as how many units are in that stack. Many units have their own special abilities that they can use in combat. Also, heroes can directly attack units as well or cast spells with their turn comes up. There are over 100 different unit types in the game, giving a good amount of depth to the combat system. Knowing what units to attack and when to attack them is extremely important, as is positioning your troops on the battlefield and effectively casting spells. The AI does a pretty good job playing smart and will keep you thinking during these battles.

When you win, your hero will gain experience that you can use to learn new abilities. There are tons of different skills that you can gain, way too many to list, but they range from having your troops take less damage from melee attacks to being able to move greater distances each turn. No two heroes will have exactly the same set of skills, making each of them somewhat unique.

With all of the resources you collect, you will be able to upgrade your castle. There are a few different types of structures you can build. Some of them will allow you to recruit new types of units for your army while others, such as the mage guild, will teach you new spells. Some buildings will add defenses to your castle like turrets and others will increase the population growth of all your creature dwellings per week. The buildings you can create are listed in a tree diagram, which is similar to some RTS games. Many buildings have requirements that must be met before you are allowed to build them. Building your structure that gives you your best units before your opponents get theirs will give you a pretty good advantage in battles.

The single player game in Heroes V consists of six different campaigns, each of which consists of five separate missions. The storyline in the game is actually decent and is told through various in engine cutscenes. While the storyline and voice acting isn’t anything special, it is good enough to keep you interested. Each mission has multiple primary and secondary objectives to complete in order to finish it. All of the missions are pretty well designed too, with lots to see and do. Most of the missions take multiple hours to complete, making Heroes V a pretty long game.

The game also features a few stand-alone missions as well as a few multiplayer maps. You can play the multiplayer maps over the internet, a LAN, or in hot-seat mode where you and a few friends take turns playing on a single PC. Multiplayer missions end when you destroy the other player’s hero and capture his castle so he can not recruit another hero. This can take a pretty long time, meaning online matches can easily take a few hours to complete. Also, waiting for other players to take their turns can be pretty boring, making the online multiplayer not very appealing.

If the game’s storyline doesn’t suck you into the world, the games fantastic graphics probably will. Heroes V is the first game in the series to make the jump into a fully 3D world. The game features a pretty good art style. Everything in the world is beautiful with a good amount of detail in their textures. All of the trees and water animate, as well as many of the buildings, which makes the world come alive. The combat animations, especially those of spells, look pretty cool. Although, it is a bit annoying that the characters mouths don’t move when they talk during the cutscenes. Also, sometimes you will have to rotate the camera around to see past buildings and trees. But overall the games 3D graphics is a great addition to the series.

Overall, Heroes V feels like an updated remake of Heroes III, which is great considering that many feel that Heroes III was the best in the series. The combat and tactics are as solid as ever, and the 3D graphics and interesting enough campaign make the game extremely fun to play. If you consider yourself a turn based strategy game fan, Heroes V is a game you should seriously consider picking up.